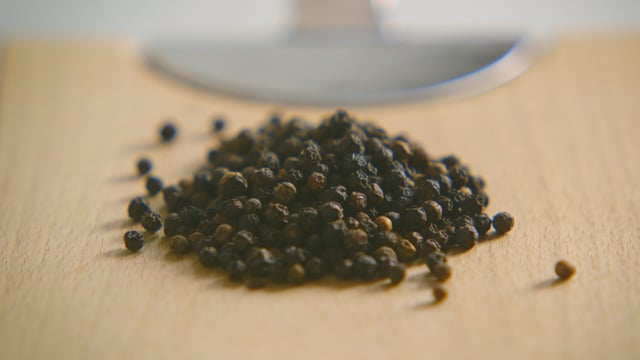 When Delia became a cookery writer years ago her first burning campaign was to rid us all of this musty, dusty ingredient called ground pepper.

Because once ground, like all other spices, it loses its fragrance and flavour. Whereas freshly ground pepper has a very special role in cooking and eating. Peppercorns begin as immature berries which are harvested and dried in the sun.  They have a black outer casing which has all the aromatic fragrance which enhances food and a white inner kernel which has a touch of fireyness. If the heat is all that's needed the berries are left to mature, the outer husks descarded, and these are what we call white peppercorns. They have lots of heat but not the fragrance and flavour of the whole peppercorn

If a recipe calls for coarsely ground black pepper the peppercorns can be crushed with a pestle and mortar, if you don't have one you can crush the peppercorns by pressing them using the back of a tablespoon on a flat surface. What all kitchens and dining rooms need is a really good pepper mill, or more importantly one that always works. We've given this one our stamp of approval. They're called CrushGrind and have a ceramic mechanism which can be adjusted by turning the mill upside down, giving it a tap to release any trapped bits, then give it a few twists and turn the wheel clockwise for finer and anti-clockwise for coarser.  They actually come with a lifetime guarantee and if the mechanism fails they will replace it. So after 42 years this is definitely a step forward for human kind