‘Cuisine is when things taste like themselves' wrote Curnonsky, a distinguished 19th-century French food writer, and therein lies the whole truth about the art of cooking - how to make something really taste like itself.

This is the real challenge that's set before anyone who wants to cook, and never was it more true than in the art of cooking potatoes. So the question is precisely this: how to make a potato really taste like a potato?

The answer begins by perhaps rediscovering a healthy respect for what a potato actually is: no longer the humble 'also ran' of the meat-and-two-veg syndrome or something used as a filler to eke out the meat, but now hopefully re-emerging as a solo star on the food stage, loved and valued in its own right. 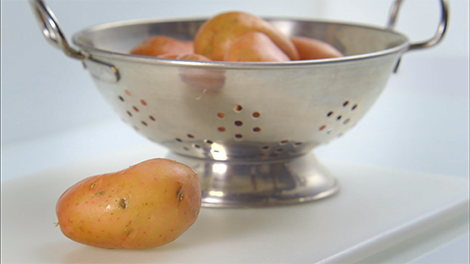 Well, in a way this is true, because in my younger days potatoes were the enemy of the perfect waistline in a less nutritionally enlightened era; it was starch that made you fat, and starchy foods like bread and potatoes had to be avoided. Thankfully, bread and potatoes have now been rescued from this scenario; fat and sugar have now emerged as the culprits and the major cause of being overweight. This means that large portions of potatoes (without fat) are nutritious, healthy, high in energy-giving carbohydrate and low in calories - only about 70 per 100g and, added to that, they are the single most important source of vitamin C in our diet. So it’s more important than ever to learn how to make the best of them.

The importance of flavour

Before you even think about how to cook potatoes, as with many other foods, the key to flavour begins in the market place or, more specifically, in the earth. I well remember growing my first crop of new potatoes and discovering that straight from the ground into the cooking pot they were both soggy and tasteless and ended up being a huge disappointment. Why? I had simply grown the wrong variety, one with a high yield but absolutely no flavour. This problem is a commercial one, too, and high-yield, disease-resistant, good-storage varieties do not always produce good flavour. So for the cook, choosing the right kind of potato is first on the list.

Thankfully there are now many more varieties of potato to choose from; we could even be in danger of designer potatoes, like salad leaves, as I have seen both black-fleshed and purple varieties (neither of which have great flavour). But whilst we hear an awful lot about the texture of potatoes - which is measured by two things, waxiness and fluffiness, and the suitability of either of these in certain dishes - we hear very little about flavour. I would therefore like to see potatoes catch up with tomatoes on this, with varieties grown specifically for flavour. But since we are learning how to cook potatoes, here is not the place to study the long lists of various varieties that appear throughout the year, but I would like to point you in the direction of a few varieties which, in my experience, are among the best available at the moment.

These, of course, have outstanding flavour, more so when they're a little more mature and larger than the tiny marbles that appear in early April.

Choose them unwashed with the earth still dinging to them, and they need to be as fresh as possible, so that when you push a piece of skin with your thumb it slides away from the flesh instantly. These are the finest new potatoes of all for steaming and serving hot or cold in a potato salad.

Pentland Javelin (May to July)

These new potatoes also have a firm texture and excellent flavour and, depending on the weather, begin to come into season when the Jerseys finish. I have also grown these and they have excellent flavour.

These now appear regularly all year and, as their name suggests, are best eaten cold. Some specialised salad potatoes, though, are more difficult to find: Ratte is an old French variety that has a delicate, nutty, chestnut-like flavour, and Pink Fir Apple a more intense potato flavour with a pink skin and a firm, waxy flesh.

This has always been my all-round reliable favourite because it has the best flavour of all commercially grown potatoes. It has a yellow, creamy, waxy flesh and bright-pink skin. I use it for boiling, jacket potatoes, roast potatoes, chunky chips and oven sautéeing, and I even like Desirée made into mash because of its depth of potato flavour.

This is an old favourite and is the best variety if you want floury fluffiness. It's not suitable for boiling, as it tends to break, but it's wonderful for jacket potatoes where you want a really fluffy inside. This is also my choice for potato gnocchi because it makes them extra light.

The above potatoes all have good flavour, but texture is sometimes a personal choice. I like to ring the changes and so sometimes I want, say, a firm, waxy, full-flavoured jacket potato, so I choose Desirée, and sometimes a more floury one, so it would be King Edward. The same applies to mashed potatoes, and what I would recommend is that you experiment to find out what you personally prefer.

To peel or not to peel?

This is a much-debated question and I have given it a great deal of thought and consideration. My conclusions are these: yes, it's best to leave the skins on, and I never scrape new potatoes, but with main-crop potatoes and it's a big but - if you're not going to peel them you must then have evenly sized potatoes so they all cook in the same amount of time.

The idea of leaving the skins on is to protect the flesh from the water or steam, which rob the potatoes of flavour. Once you start cutting them into even-sized pieces, that protection is lost. Also, if skins are left on for cooking, I would say that you should then serve the potatoes with their skins, as peeling hot potatoes while holding them in a cloth is okay if it's for one or two people, but for six servings it's quite awkward and hazardous. In Ireland, boiled potatoes are served with skins on and people who don't want to eat them leave them on the side of their plate, and I think this is a good option for steamed or boiled potatoes. I have compared steaming without skins and boiling with and found very little difference in flavour. If you are going to peel the potatoes, then please, please use a potato peeler. All the best of the flavour is near the skin, so you need to pare it off as thinly as possible.

I have a beautiful old cookbook called Henderson's House Keeper Instructions, and in it potatoes are boiled thus: '...in so small a quantity of water as will be sufficient to keep the saucepan from burning. Keep them close covered and as soon as the skins crack they are enough.'

Need I say more? Remember that having got hold of the perfect-flavoured potatoes, it's water that's going to take away their precious flavour. I have witnessed potatoes being murdered - covered with gallons of water, put on a low heat and left for an hour or even more, like the Victoria Wood joke about British cooking and the lady who put the sprouts on for the Christmas lunch in November! (We've all, I'm sure, experienced it.) The number one rule here is, first of all, if you are peeling potatoes, don't let them sit around in water for hours before they're needed. If you peel them then try to do so just before you need them. 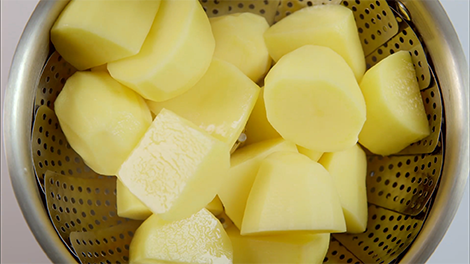 For cooking, the best way I have found to retain the flavour of the potatoes is not to boil them at all but to steam them. Firstly pour boiling water from the kettle into a pan fitted with a fan steamer then place the potatoes in the steamer, sprinkle with salt (about 1 rounded teaspoon per 450 g), and if they're new potatoes tuck in a few sprigs of mint. Then put a tight lid on and let them steam over a lowish heat, which is just needed to keep the water gently boiling until the potatoes are tender. This will take 20-25 minutes, and the best way to test whether the potatoes are tender is to use a thin skewer inserted in the thickest part.

After that, drain off any water beneath the steamer, then place a cloth over the potatoes for 4 minutes, which will absorb some of the excess steam that tends to cling to the potatoes and make them soggy. If you prefer to boil rather than steam, then use as little water as possible, add it boiling from the kettle and put a close lid on. The lid keeps the heat in and they will cook more quickly so spend less time in the water.

Don’t forget that, cooked with a little care, plain steamed or boiled potatoes can, just on their own, be quite special. And they don't need lashings of butter; a little is a nice addition, but don't drown them with butter as some restaurants still insist on doing. All that does is swamp the delicate natural flavour of the potatoes. Gilding the lily is a sign of insecurity in cooking, and I feel it's so important to renew our confidence in the simplicity of things.