In the 1960s only two kinds of pasta were known to most people: spaghetti, which came in tins and was served on toast, and macaroni, which was served either in a cheese sauce or as a pudding. Yet, 30 years later, pasta exploded into our lives with such force that almost became a standard British staple — we now consume more than 2kg per head per year. The trouble is that a lot of this is not, in the strictest sense, real pasta; not in the way it was originally and brilliantly conceived to be. And now many modern pasta makers have, I feel, completely lost the plot.

What is real pasta?

Originally, pasta in Italy was a conception of sheer genius. It began with growing the highest-quality hard wheat, and the name given to this specific type of wheat was durum, from the Latin, meaning hard. After the pasta maker had purchased exactly the right grain, the next important stage was finding the right miller to mill the grain to a certain precise specification —and not to a fine, powdery flour but to something called semolina, which is derived from the italian for 'semi milled' and is quite unlike flour, as semolina is made up of tiny, coarse, corn-coloured granules with sharp edges. 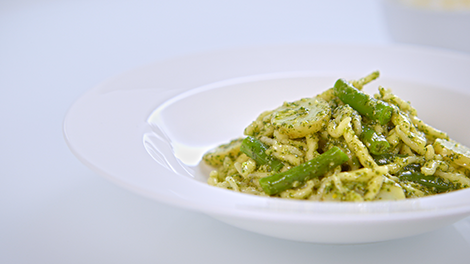 The skill of the pasta maker was to then carefully mix the semolina with cold water. Then, after the mixing came the shaping, and the pasta was forced through special bronze dies, which gave it a specific texture. After that the pasta was dried in open-windowed lofts where either the mountain air or sea breezes — or both, depending on the region — could circulate. This carefully monitored drying process could take up to two days. It was this natural drying process, along with the specifications above, that produced a quality of pasta that had captured within it all the nuttiness and flavour of the wheat grain but also a special texture. The semolina and the effect of the bronze dies produced a roughness at the edges which, in its grand design, would provide, when cooked, the right kind of surface on which the sauce being served with it would adhere and cling and not slide off. So simple, so subtle and so wonderful.

What happened next was that, soon, everybody outside Italy wanted to eat pasta, too, and once this kind of mass production was under way, corners were cut, profit margins came into play, soft flour was added, hot instead of cold water, there were nylon dies, speeded-up hot-air quick-drying, and the whole process underwent a shift from quality to competitive price wars and then it was the 'sliced white' here-we-go-downward-spiral all over again. 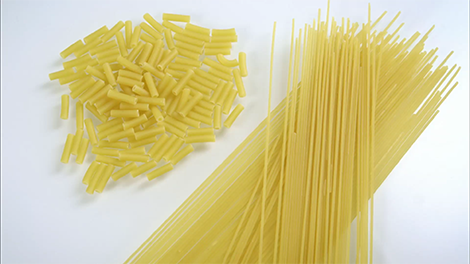 But something else has crept into the frame at the same time, and that is the misguided and false conception that fresh pasta is better than dried. Yes, Italians do make and eat a very small amount of pasta fresca, but it is a different concept; one that more usually involves a filling, as in ravioli or tortellini. But in this country — and in America — pasta fresca has gone crazy. It's now a far cry from the original described above and it's a strange paradox to clone a product that has a natural shelf life of two years, then make it and sell it as fresh, then add something that will give it a longer shelf life and at the same time call the resulting slithery, slimy gloop made with soft flour and eggs pasta.The other modern misconception is to serve more sauce than pasta. Good pasta should be enjoyed for itself, with a small amount of concentrated sauce used to merely dress it.

The case for good-quality dried pasta

If you want to enjoy cooking and eating pasta at its best, then my advice is to buy good-quality dried pasta. Yes, it does cost more, but we're not talking about great luxury here; we're talking about a main meal for two people that might cost £2 instead of £1. 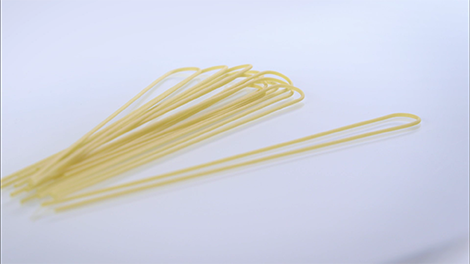 There are a few artisanal pasta makers in Italy who still make the real thing, and one such supplier is Fratelli Camisa. The only fresh pastas I ever buy are ravioli, stuffed pasta shapes or lasagne sheets, which are, I think, of a far better quality than most of the dried packs. Once you taste quality dried pasta, it will be very hard for you to return to the industrially produced alternatives. It's not just the flavour: the firm, rough texture not only puts it way out in front but actually helps you to achieve that al dente 'firm to the teeth' texture that is the mark of well-cooked pasta. Poor quality often ends up sticky and soggy. So when you buy your pasta, make sure it says pasta di semola di grano duro —durum wheat semolina pasta.

There are certain dried pastas that contain eggs — pasta all' uovo — which add richness, but I now prefer the original semolina and water version and like to keep the richness confined to the sauce.

How to cook perfect pasta

The easiest way to communicate this is to give you a list of what is absolutely essential. 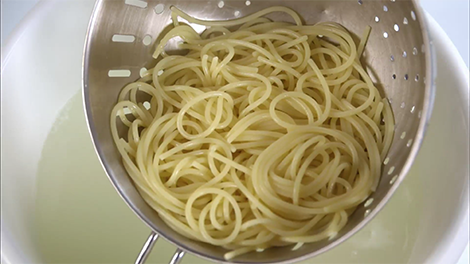 1. Always use a very large cooking pot.
2. Always make absolutely sure you have at least 2.25 litres of water to every 225 g of pasta, with 1 level tablespoon of salt added. 225g of pasta will serve two.
3. Make sure the water is up to a good fierce boil before the pasta goes in.
4. Add the pasta as quickly as possible and stir it around just once to separate it. If you're cooking long pasta, like spaghetti, push it against the base of the pan and, as you feel it give, keep pushing until it all collapses down into the water.
5. You don't need to put a lid on the pan: if it's really boiling briskly it will come back to the boil in seconds, and if you put a lid on it will boil over.
6. Check the packet for a guide to the cooking time. Top quality pasta will need about 9 – 12 depending on the shape, but the only real way to tell is to taste it. So do this after 8 minutes, then 9, and 10, and so on. This only applies when you cook a particular brand for the first time. After that you will always know how long it takes. Sometimes you can give it 1 minute's less boiling and then allow an extra minute's cooking whilst you combine it with the sauce.
7. Have a colander ready in the sink, then, as you are draining the water, swirl it around the colander, which will heat it ready for the hot pasta.
8. Don't drain it too thoroughly: it's good to have a few drops of moisture still clinging as this prevents the pasta from becoming dry. Place the colander back over the saucepan to catch any drips.
9. Always serve it on deep warmed plates to keep the pasta as hot as possible as it goes to the table.
10. For spaghetti, the very best way to serve it is to use pasta tongs and always lift it high to quickly separate each portion from the rest.
11. If the pasta is going to be cooked again, in a baked dish like macaroni cheese, for example, give it half the usual cooking time to allow for the time in the oven.
12. Presto pronto! ln Italian this means soon and quickly. Always work quickly, as pasta won't hang around — if it cools it goes sticky and gluey, so drain it quickly, serve it quickly and eat it quickly.

How to eat spaghetti and other long pastas

This is how I describe this in the Cookery Course. 'The big mistake here is trying to wind too much on to the fork at once. Select just two or three strands with your fork and coax them over the rim of the plate. Then, holding the fork at a right angle to the plate, simply wind the fork round and round, so that those few strands extricate themselves from the rest and are twisted round the fork in a little bite-sized bundle. Easier said than done, you're thinking? But remember — practice makes perfect. 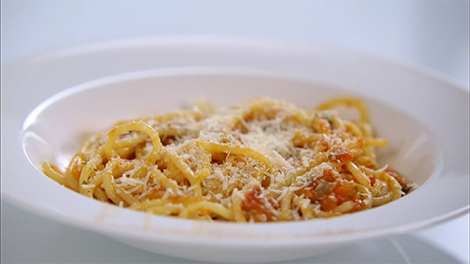