The principles of casserole cookery

Casseroling is really easy if you follow a few guidelines. Delia explains everything you need to know, including trimming, browning, skimming and reheating, for perfect results every time.

Trimming and size of meat pieces

One thing that’s often disappointing with cuts of braising steak (and this is especially true of the packaged meat found in supermarkets) is that they are sliced too thinly. For braising in whole slices, cuts of ¼-¾ inch (1-2 cm) thick are all right, but for many casseroles the ideal sized pieces are 1½ inches (4 cm) square and 1¼ inches (3 cm) deep. Therefore it is preferable to buy a piece and cut it up yourself. Trim off excess fat and gristle before using, but remember that some connective tissue and marbling add richness to the dish.

How much per person?

This depends on all sorts of things – how much the meat needs to be trimmed, what extra ingredients go into the casserole, what other dishes you plan to serve at the same meal and so on – but, on average, I find that 6-8 oz (175-225 g) of meat per person is needed if someone has a large appetite, like my husband. For a normal appetite 6 oz (175 g) per person is usually adequate. Moreover in all meat recipes I have allowed a certain latitude, indicating they could serve two to three or four to six etc, so that you can choose for yourself.

Most, though not all, meat benefits from being seared in hot fat before the liquid is added. I have found that searing meat at a high temperature, as compared with browning it over a medium heat, results in far less visible loss of juices. Meat fibres contract when heat is applied, squeezing out juices from inside: but if the heat is high enough these juices will be burnt into a crust on the meat instead of being lost in the cooking fat. I would also add that this dark, mahogany-coloured crust on the outside of the pieces of meat gives a richer, better flavour to a casserole.

One important note, if you’re browning meat in batches and removing it to a plate, is to make sure that whatever juices do run out are re-incorporated into the casserole and not lost. And one final point: never overcrowd the pan during the browning. If you do, there will be too much steam rushing out and the meat will never brown because it will have become damp. So remember, brown only a few pieces at a time.

The liquid in a casserole, mingling with the meat juices that do escape, provides the finished sauce. Bone stock is good for beef casseroles, but failing that plain hot water enriched with a few drops of Worcestershire sauce and mushroom ketchup makes a handy instant stock. Red or white wine will add extra flavour of its own, and its acidity will actually help to tenderise the meat as it cooks. Beer (pale or brown ale, or stout) makes a deliciously rich sauce: the long slow cooking transforms it completely, leaving no trace of its original bitterness. Tomatoes – fresh peeled or tinned Italian plum tomatoes – also give body and flavour to certain casseroles, like goulash. A good alternative is hot water enriched with tomato purée. Cider is also delicious in casseroles – but it must be dry cider.

Some casserole recipes call for the liquid to be thickened, and this can be done in various ways. The most popular way is to add some flour to the casserole after the meat has been browned (so that it can mingle with the juices and fat in the pan) and before the liquid is added. It is exactly the same principle as for the thickening of a white sauce. Another way to thicken a casserole is to toss the meat in the seasoned flour before browning it. Alternatively, when the casserole has completed cooking, the liquid can be strained off and simmered until slightly reduced and thickened. Or a flour and butter paste can be whisked into the liquid at the end of cooking time: 1 oz (25 g) butter worked into 1 oz (25 g) flour should thicken 1 pint (570 ml) liquid. This butter-flour paste, called beurre manié in classic cooking, can be frozen in blocks in ice-cube trays – but it doesn’t take a minute to make as and when you need it. Add it to the liquid in little flecks, and use a balloon whisk to whisk it in.

If vegetables are to be included along with the meat in a casserole, the main consideration is not to cut them too small. This is a common mistake and results in the vegetables disintegrating under the strain of the long cooking. This applies particularly to onions, which if sliced too small can collapse altogether. It’s far nicer, I think, to be able to discern slices of onions that have retained their shape. Vegetables that cook quite quickly (such as green peppers and mushrooms) are usually added to a casserole halfway through or towards the end of cooking time.

Slowly, slowly is the word that needs to be emphasised here. It is said that the correct simmering temperature is reached when the liquid shows the barest shimmer of movement and an occasional bubble breaks the surface. I have found that, using heavy flameproof casserole, the ingredients for a beef casserole can be brought slowly up to simmering point on top of the stove, then transferred to the middle or low shelf of a pre-heated oven. Gas mark 1, 275°F (140°C) is gentle enough to produce the very best results. But ovens vary and different types of cooking pots will affect temperatures too, so you may have to adjust the oven temperature accordingly.

The time a casserole takes to cook will vary from 2-2½ hours for chuck, blade and thick flank, up to 4 hours for shin, leg and neck. Pork cuts for braising and casseroling normally take 1½ hours, and lamb much the same.

If a fair amount of fat has come out of the meat during the cooking, it will settle on the surface and can be removed by tilting the casserole slightly and spooning off with a large kitchen spoon. And if there’s still some left, another tip is to float two or three pieces of absorbent kitchen paper on the surface – this should soak up any fat remaining. Of course, if you’ve had time to make the casserole in advance, the fat on the surface will solidify as it cools and can then just be lifted off. Which brings me to:

Many casseroles seem to improve in flavour if kept overnight (cool them quickly and keep them in a refrigerator, by the way, once they’re cold). This means it’s quite possible to make two casseroles while the oven is in full swing, and keep one for the next day. The reheating must be done very thoroughly, though, either on top of the stove over a very low heat or in an oven heated to gas mark 3, 325°F (170°C). Either way, the food must come up to a gentle simmer and maintain that temperature for 30 minutes to kill off any harmful bacteria. So it will take 45 minutes in all. 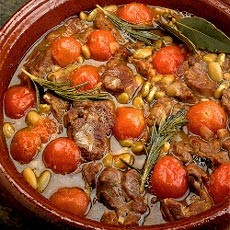 How to cook > Meat