How to steam potatoes

To peel or not to peel? This is a much-debated question and I have given it a great deal of thought and consideration. My conclusions are these: yes, it's best to leave the skins on, and I never scrape new potatoes, but with main-crop potatoes – and it's a big but – if you're not going to peel them you must then have evenly sized potatoes so they all cook in the same amount of time. The idea of leaving the skins on is to protect the flesh from the water or steam, which rob the potatoes of flavour. Once you start cutting them into even-sized pieces, that protection is lost. Also, if skins are left on for cooking, I would say that you should then serve the potatoes with their skins on, as peeling hot potatoes while holding them in a cloth is okay if it's for one or two people, but for six servings it's quite awkward and hazardous. 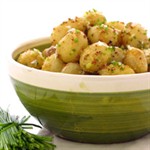 If you are going to peel the potatoes, then please, please use a potato peeler. All the best of the flavour is near the skin, so you need to pare it off as thinly as possible. Pare off the skins as thinly as possible, then cut the potatoes into even-sized chunks – not too small; if they are large, quarter them, and if they are small, halve them. The number one rule here is, if you are peeling potatoes, don't let them sit around in water for hours before they're needed. If you peel them then try to do so just before you need them. 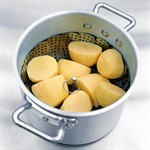 For cooking, the best way I have found to retain the flavour of the potatoes is not to boil them at all but to steam them. Firstly pour boiling water from the kettle into a pan fitted with a fan steamer, then place the potatoes in the steamer, sprinkle with salt – about 1 rounded teaspoon per 1 lb (450 g) – and if they're new potatoes tuck in a few sprigs of mint. Then put a tight lid on and let them steam over a lowish heat, which is just needed to keep the water gently boiling until the potatoes are tender. This will take 20-25 minutes, or 15-20 minutes for small new potatoes. 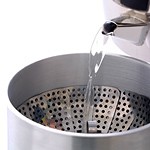 The way to tell whether they are ready is to pierce them with a thin skewer in the thickest part: they should not be hard in the centre, and you need to be careful here, because if they are slightly underdone you do get lumps. 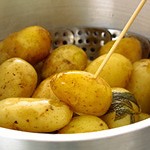 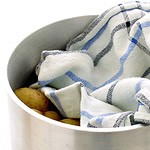 How to cook > Fruit and vegetables

New Potatoes with Bacon and Onion