How to slice and chop onions

Over the years I've been given countless methods of how not to cry when preparing onions. One enterprising person even sent me a battery-operated fan to fan away the fumes, but I can honestly say that nothing really works. For chopping, however, food processors have made things a lot easier, and now there aren't as many tears as there used to be. If you want to slice onions, cut off the root end, then peel away the skin. Slice in whole round slices and separate into rings, or else cut the onion in half first and then slice into half-moon shapes. 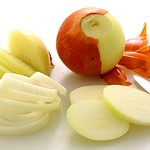 To chop small (without a processor), leave the root intact, then peel away the skin from the top end. Now cut the onion in half and place each half on a flat surface, round side up. Next, make cuts vertically from the root end but leaving the root intact to hold it together. 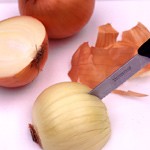 Then make horizontal cuts across the vertical cuts whilst you hold on to the root end firmly. The last cut will be the little root bit, and this can be discarded. 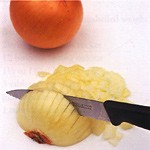 Rough chopping is as above, making about three cuts vertically across each onion and then three horizontally 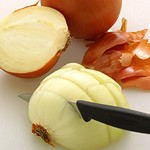 How to cook > Fruit and vegetables

Sharpening a Knife and Chopping Onions

How to roast beef

How to steam potatoes