The science of cake-making

What happens when you bake a cake? Delia demystifies the art of the teatime treat.

I’ve never believed, as some people seem to, that you either have a gift for cake-making or you don’t. Confidence is the key and nothing can shake one’s confidence like having a failure with a cake into which so much care has gone. So perhaps the first thing we ought to do is to try to understand what is actually happening when a cake is being baked – because any interference with this process could end in the failure we all want to avoid!

When fat and sugar are mixed together – the process is called creaming – little bubbles of air are being trapped in the mixture, each one surrounded by a film of fat (which is why the mixture changes colour during creaming as the trapped air creates a foam). It is this air which produces the lightness in the finished cake, but unless beaten egg is added to the mixture the fat would collapse and the air escape during cooking. The egg white conveniently forms a layer around each air bubble, and as the temperature of the cake rises in the heat of the oven this layer coagulates and forms a rigid wall round each bubble, preventing it from bursting and ruining the texture of the cake.

During the baking the bubbles of air will expand and the cake will ‘rise’. At the same time the stretchy gluten in the flour – which has formed an elastic network round the air bubbles – will stretch until, at a higher temperature, it loses its elasticity and the shape of the cake becomes fixed.

But until that moment is reached the expansion process must be allowed to continue uninterrupted. Which is why a) the cake should be baked as soon as it is mixed and b), even more importantly, the oven door should never be opened in the early stages of cooking: the temperature will drop suddenly and the air in the cake will stop expanding and actually contract. The whole structure of the cake will then sink back because there’s nothing to prop it up. So, remember, never look at a cake until three-quarters of the cooking time has elapsed. 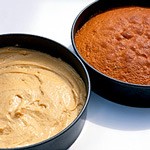 How to cook > Baking

How to roast chicken