Once a rare and precious commodity, sugar has gone from being the nation's universal sweetener to the scourge of the healthy-eating brigade. Yet its consumption prevails, its flavour ever-popular. Delia visits the island of Mauritius, where a family firm has helped to develop a very special range of unrefined sugars.

Think of sugar and the first thing you probably think of is what a lot of flack it's had of late. Firstly, at the more lunatic fringe of the nutritional debate, sugar has become a deadly word – almost on a par with adultery – and the unacceptable face of modern eating. Then there have also been very big guns firing on sugar from all directions: the dentists, the healthy-diet gurus, not forgetting the slimming lobby leaping about in leotards and pointing the finger at all things nice, saying cut down on fats, cut down on booze, and sugar, well, it's an absolute no no. So, what with this undercurrent of prohibition continuing to rage, and with many young people at the same time suffering from eating disorders, we may well reflect that life has not been quite so sweet of late. 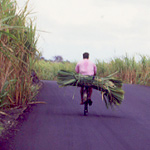 Or has it? Sugar, I have to report, is actually holding its own. We may not be buying so much off the shelves, but its hidden presence in convenience foods, baking, confectionery and soft drinks means that consumption in the UK has not changed that significantly. Also, now that chemical sweeteners find themselves in the firing line as their cumulative effects are unknown, sugar, dare I say it, could be a far healthier option.

But that's not all. The really good news is that while the health debate continues to rumble on, good old traditional British cooks – no, not French or Italian or even Californian – have quietly and defiantly continued to make proper puddings, home-made rich fruitcakes and biscuits, chutneys and preserves. It is to them that we owe the emergence of what are called unrefined sugars, a bespoke collection of sugars made straight from the cane, with all their natural flavour intact. For people who cook and care about using the finest ingredients, this is good news indeed. 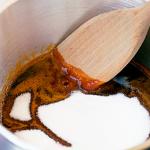 Sugar has an intriguing history. Sweetness accounts for 25 per cent of our taste experience (the other three tastes are sour, salt and bitter), and while there is natural sweetness in many foods, such as milk, ripe fruit and nuts, there are other foods that are unpalatably sour unless some sweetness is added. Imagine damson crumble or lemon tart without the sweet.

Until the 14th century, the only way to sweeten foods in this country was with fruit syrups or honey. When sugar cane first arrived in Europe, it was expensive and as precious as the spices that accompanied it, but then, in the 16th century, honey became scarce. The principal beekeepers were the monks (who also used beeswax for their candles), and after the Reformation, the monks themselves became scarce. 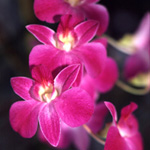 However, at the same time, settlers in the New World were discovering how to grow sugar cane in hot, sunny climates (it was Columbus himself who observed that the canes grew faster in the Caribbean than anywhere else). And so began the growth of huge sugar plantations in the area, the importing of slaves from Africa to cut the canes, and the creation of enormous fortunes as raw cane sugar was shipped to the great refineries of Europe and sugar became the universal sweetener.

Until the 19th century, most refining was anything but sophisticated. Only the invention of equipment such as the vacuum boiling pan and centrifugal machines made the production of white sugar as we know it today possible. To the Victorians, this whiteness meant purity – with some justification in those days, and that meant it was fashionable. The sign of a refined person was that they ate refined foods – if you were upwardly mobile in Victorian England, you only ever put white sugar in your desserts and white flour in your bread; the working classes had to use the coarser brown sugar and flour. How intriguing that a century later we have come the full circle. We now live in the nothing-added, nothing-taken-away era, and those who are 'keeping up appearances' now would never be caught with a sliced white loaf or eating cornflakes sprinkled with white sugar – and it's not just a question of fashion, either. 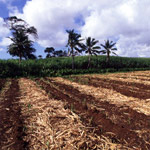 Sugar comes from two sources: cane and beet. While both go through the refining process, beet loses nothing worth keeping in terms of flavour, it simply provides a pure, concentrated sweetness that is sometimes desirable when no other flavour is required. White sugar made from beet and white sugar made from cane have no difference in taste whatsoever, but what happens in the refining of cane is that flavour is lost because that precious part of the sugar cane, molasses, is refined out. However, because there is a demand for brown sugars (which, in the case of unrefined products, have degrees of molasses left intact), it is possible to reintroduce some molasses to refined white sugar and make it brown again. Trouble is, it doesn't have the same quality and flavour as it would if it had been left there in the first place, and any side-by-side tasting would leave you in no doubt about that. 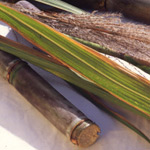 To find out for myself the dark – and not so dark – secrets of unrefined sugar, I travelled to the island which produces the finest range in the world – Mauritius. It is here that the Mauritians and a British family firm, Billington's, have together pioneered a sweet success story. 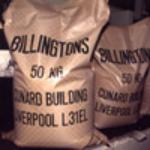 Mauritius has been nicknamed 'the sugar bowl' because the crop has, for centuries, been the very lifeblood of the island and its inhabitants. It is a volcanic island that, like sugar itself, boiled and bubbled up from the depths of the Indian Ocean some four million years ago. Mark Twain's famous quote, 'You gather the idea that Mauritius was made first and then heaven was copied after Mauritius', is a description that cannot be bettered. 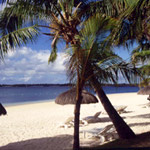 The sparkling sea surrounding the island is a kaleidoscopic mixture of deep and pale blues and turquoises. The land is lush and green – a natural tapestry of variety and colour, and everywhere you see the swaying green and golden mantle of sugar cane against a backdrop of mountains, oddly yet somehow appropriately shaped (imagine pulling a palette knife up out of stiff icing sugar and you can visualise the same craggy, pointed peaks).

Centuries of cane cutters have gathered together the countless volcanic boulders into mounds to create space for the canes, and in every direction you can see what look like giant molehills thrusting up through the soil and acting as protection to the canes in the summer cyclone months of January to March. The cane is still mostly cut by hand, and in the mornings, before the sun gets too hot, teams of cane cutters wave and smile at you as you pass, and amiably agree to be photographed. The Mauritians are a vibrant, colourful people, a melting pot of race and culture. The island has been successively Dutch, French and British, with a constant influx of Chinese, Indian and African settlers. There are French accents, English road signs, women in bright saris, Tamil temples, mosques and churches all mingling together, and for food lovers, the combinations of Creole, Indian and Chinese provide a spectacular choice. 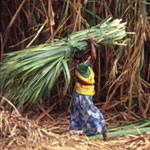 Tucked everywhere in between the sugar plantations are tropical fruit, spices and an effulgence of dazzling flowers, yet for me the quintessential part of the Mauritian experience happens as you draw near to one of the sugar mills. You are greeted by the unmistakably warm, exotic aroma of molasses – think of the smell of a freshly baked Christmas cake just emerging from the oven, or a pan of bubbling toffee. During the harvest from August to December, the mills work nonstop, 24 hours a day, as convoys of cane lorries feed their enormous appetites. 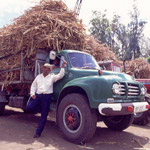 Sugar cane – the 'greenest' plant of all

Sugar cane is a magical plant, perhaps the 'greenest' plant of all. The skills of Mauritian agronomists have, through cross-breeding, kept it disease-resistant, so no insecticides are used at all. It has enormous, strong roots which hold in the moisture and keep it immune to drought, and it is sturdy enough to survive the Mauritian cyclone season. It is a monoculture, which means it reshoots after harvesting, and each plant provides 8-10 years of growth. After that, the new plants go straight back into the same soil, so no crop rotation is necessary. 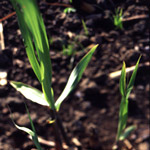 It is almost as if Mauritius was created to grow sugar cane: it has just the right amount of sun and rain, and both at just the right time. During the very hot, damp cyclone season from January to March, the new plants grow to their full height: up to 16 feet. Then in May and June the temperature drops, which halts the growth, but the sun continues to shine, and the chlorophyll in the plant attracts the sun and turns the starch within the plant into sugar or in its raw state, liquid sugar.

But that's not all. When the cane is cut, the green top leaves are stripped and left on the field to renourish the soil. After the juice has been extracted in the mill, the fibrous part, called bagasse, is burned in a boiler to produce steam and provide electricity to power the mill, but because there is more than enough for that, the power surplus is sent to the national grid.

So no oil is needed to fuel the mill, and there's power to spare. The by-products, muds and ashes, are sent back to fertilise the fields, and the surplus molasses is either fed to cattle or distilled into rum. What a plant. Environmentally friendly seems a bit of an understatement. Environmentally ardent might be a better description. 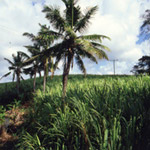 The case for unrefined sugars

In this age of mass production and mass marketing, there has inevitably been an emphasis on quantity, sometimes at the expense of quality, and high profile backed by high finance has often steamrollered small, independent producers of quality out of existence. Thus it is all the more laudable that a private British family firm like Billington's (who have pioneered their cause) have shared their skills and enthusiasm with those of the Mauritius Sugar Syndicate. Together, they have created what is, without doubt, the finest collection of quality sugars in the world.

Thus, those of us who really care about quality and flavour are given a real choice. 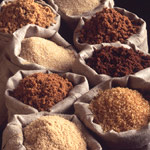