Would you believe one of the most important ingredients in the making of Parmigiano Reggiano – the true Parmesan – is Italian air? Delia visited Emilia-Romagna to savour the history and culture of Parmigiano and breathe in the air. Photographs by Peter Knab 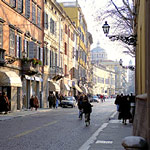 During the early Eighties, I remember passing on a little advice on television: 'If you want to improve your cooking, and eating, overnight, never use preserved grated Parmesan cheese – a travesty of the real thing. Buy it in blocks instead and grate it freshly yourself.'

Fifteen years later I would have to be even more specific. If you want to eat the very best – and gain the highest acclaim for your cooking – never simply settle for Parmesan cheese, only that which is branded with the magic words Parmigiano Reggiano.

This is the aristocrat of Italian cheeses, or crowned king, they will tell you locally. And with every justification. For the lover of fine cheese, Parmigiano Reggiano should not just be a permanent fixture among their store of ingredients, it deserves to be enjoyed just as it is, as a nibble with apéritifs before a meal or as a cheese course to make a grand finale to the perfect meal. I'm delighted to see that the more discerning restaurants are doing just that, although realisation of its worth is not exactly new. During the Great Fire of London, that most discerning of diners, Samuel Pepys, thought the cheese so precious that he dug a hole to bury his Parmigiano Reggiano to preserve it from the flames.

Parmigiano Reggiano has appeared on the banquet menus of European courts for centuries and has been enthused over by the likes of Napoleon and Molière (who asked for it on his deathbed), so why is it only now beginning to come to our attention again and what makes it so special?

The answer to these questions lies in Italy, and more precisely in northern Italy, the area from Turin to Venice known as the Po Valley, after the river that runs through it. Its other, more local name is the Valley of Food, and it is indeed a land blessed with rich fertile soil, a vast plain where the stars of the kitchen shine brightly: fat round rice grains for risotto, plump tomatoes, pastas, cheeses, salamis, balsamic vinegar. And nestling in the centre of all this is Parma with the brightest stars of all, Prosciutto di Parma and Parmigiano Reggiano.

The cheese is the product of some 900 small cheesemakers scattered around the valley and up into the foothills of the snow-capped Apennines, and these are served by tens of thousands of dairy farms with their lush rich pastures. I am invited to sniff the heady scent of the sweet grass on which the cows are principally fed – a vital ingredient – and I notice the cows themselves have a look of self-importance about them. So highly do the locals value their milk that every last drop goes into the cheese. If anyone wants to drink the stuff, it has to be imported – from Bulgaria as it happens!

It is not just how the cheese is made that's important, but where

There is another, more mysterious, ingredient in the making of Parmigiano Reggiano and that, believe it or not, is the air. To the north and south of the great plain lie the mountains, on either side the Mediterranean, and in some indefinable way the mingling of the sea breezes and mountain air is vital to the natural ageing and maturing of the cheeses.

The original cheesemakers' houses were built with openings of angled, slatted stone, rather like Venetian blinds, to allow the precious air to circulate. Even today the only computer technology used in the modern cheese stores is for regulating the opening and closing of the windows. 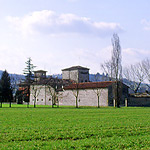 All this underlines the first lesson: it is not just how the cheese is made that's important, but where. This strictly controlled area covers the provinces of Parma, Reggio Emilia, Modena, Mantua on the right bank of the Po, and Bologna on the left bank of the Reno. Anything produced outside is not the real thing, but (as happened with Champagne and similarly exclusive things in life) others in Italy and elsewhere began to produce lookalike and tastealike cheeses. After the second world war, the once flourishing export trade in genuine Parmigiano Reggiano came to a complete halt.

Fortunately, the Parmigiano Reggiano Consortium, founded in 1934, began the slow process of protecting and promoting the original. Now, only cheese stamped with the consortium's official brand and subject to its strict controls on the traditional methods can be called Parmigiano Reggiano. Anything else is called 'grana' in Italy and merely Parmesan elsewhere.

If God has smiled on the geological formation of this area, then the same smile is evident in its inhabitants. Parmigiani are a vibrant, proud people with mega-enthusiasm not just for their work, but for food, wine and life itself. There is only a half-joking chauvinism that has never quite accepted the unification of the Italian states, which is borne out by the very name of the cheese. When the two states, Parma and Reggio Emilia, became allies, neither could concede the title to the other. One member of the consortium who lived in Parma explained to me, straight-faced, how he regularly takes a last lingering gulp of Parma air before crossing into 'foreign territory'.

There is one more, not so secret, ingredient and that is the fierce pride in a traditional process which has not changed in seven centuries, a process which is rooted in nature and human skill. You sense this pride in the vehemence with which short-cut technology is spurned – not for the sake of tradition, but in the belief that a naturally made cheese is a better product. 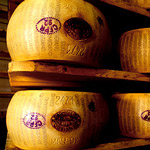 You sense this pride in the farmers whose milk, to avoid refrigeration, is transported in old-fashioned milk churns. You sense it in the cheesemakers themselves. In each cheesemaking house only four people (usually members of the same family) are involved in producing 20 to 25 cheeses every day. Only the stirring is automatic: it is the cheesemaker who is constantly using his hands, touching, looking, smelling, tasting, sensing when that mysterious moment of completion has been reached. There is a light forever burning beside Christ the King on the wall of the dairy; the appeal for divine intervention is poignant and one certainly gets the feeling that no heavenly banquet would be complete without this cheese.

The traditional skills extend even to the rigorous inspections that cover every aspect of the process. In the cassina, the storehouse, an inspector is tapping the cheese with his percussion hammer, listening intently to the heart like a doctor with a stethoscope. He can hear how the crust takes the blows, any defects, cracks, holes or trapped gases can be detected. The diagnosis continues with a screw needle piercing the crust to gauge the resistance of the cheese and extract minute samples. Only when he's satisfied with the flavour, fragrance and creamy quality that melts in the mouth is a cheese branded with the famous consortium stamp.

Naturally enough, in Parma, every restaurant is a temple to the cheese

Back in Parma, the cheese comes sprinkled on huge pasta pillows called tortelli, or, more unusually, a lightly spiced pumpkin purée. It permeates the creamiest risottos I've yet tasted. It is served in salads layered between rocket leaves – heavenly! Best of all, it is produced at the end of the meal with the traditional almond-shaped knife that is used to crumble the cheese rather than cut the pieces off it (so leaving the texture intact), and served with pears and the local Lambrusco, dry and light, or else with the dark local nut liqueur called Nocino. 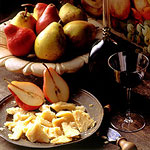 True Parmigiano Reggiano is not as cheap as imitations, but because of its deep rich flavour a very little goes a long way. It keeps well. Once the vacuum pack is broken, store it in a polythene bag in the fridge. But if, as I strongly recommend, you serve it as a cheese course or with apéritifs, do make sure it has come back to room temperature to enjoy its fullest flavour.

Finally, when you've grated some for your pasta or risotto, take a spoonful and have a good long sniff. Can't you detect it all – the air, the sweet grass, the cheesemaker's skill, the long slow ageing? I'm sure any lover of fine cheese has to agree with the Parmigiani, this is the crowned king.

For over 40 years Pam Ayres had been delighting fans with her witty stories and poems. Her latest book Who Are You Calling Vermin? A Country Conflict is out now, and we have 5 copies to give away.