Early in the month we had the elections for the school council (municipio).  This is a legal requirement with all the trappings of a general election.  Parties are formed (three this year), propaganda is distributed and there is a debate when the three parties reveal their manifestos.  They can (and were) challenged by the other parties, the electorate and the teacher controlling the debate.  Two days later the elections were held, using the same boxes as in the official elections, ID cards, fingerprint, signatures. 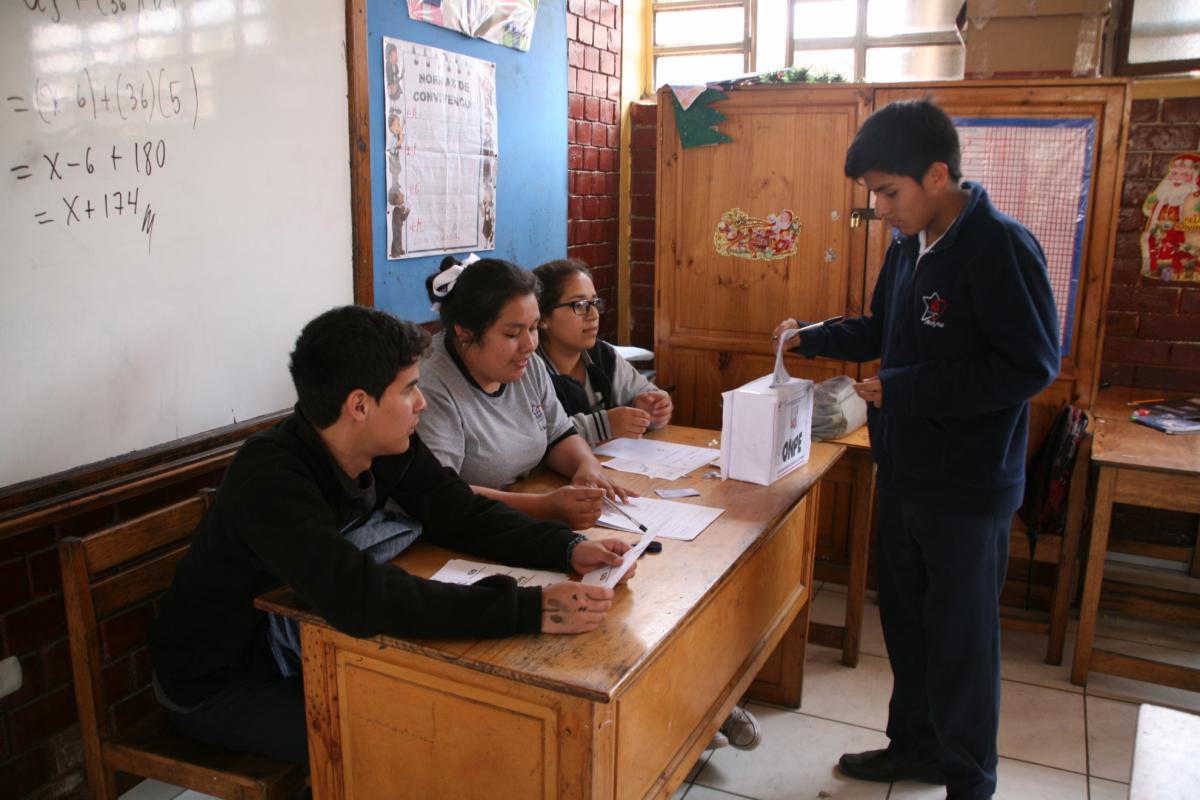 The 5th year were in charge of the booths and a team of them with four teachers did the official counting.  The winning margin was six votes, after loads of checking of valid votes and rejected votes.  There was no appeal.  The winners were PACME – in English “Promoting actions that will change the student world.  The photo is of the winning party with its leader (alcalde – mayor).  Now after all the promises we have to see. 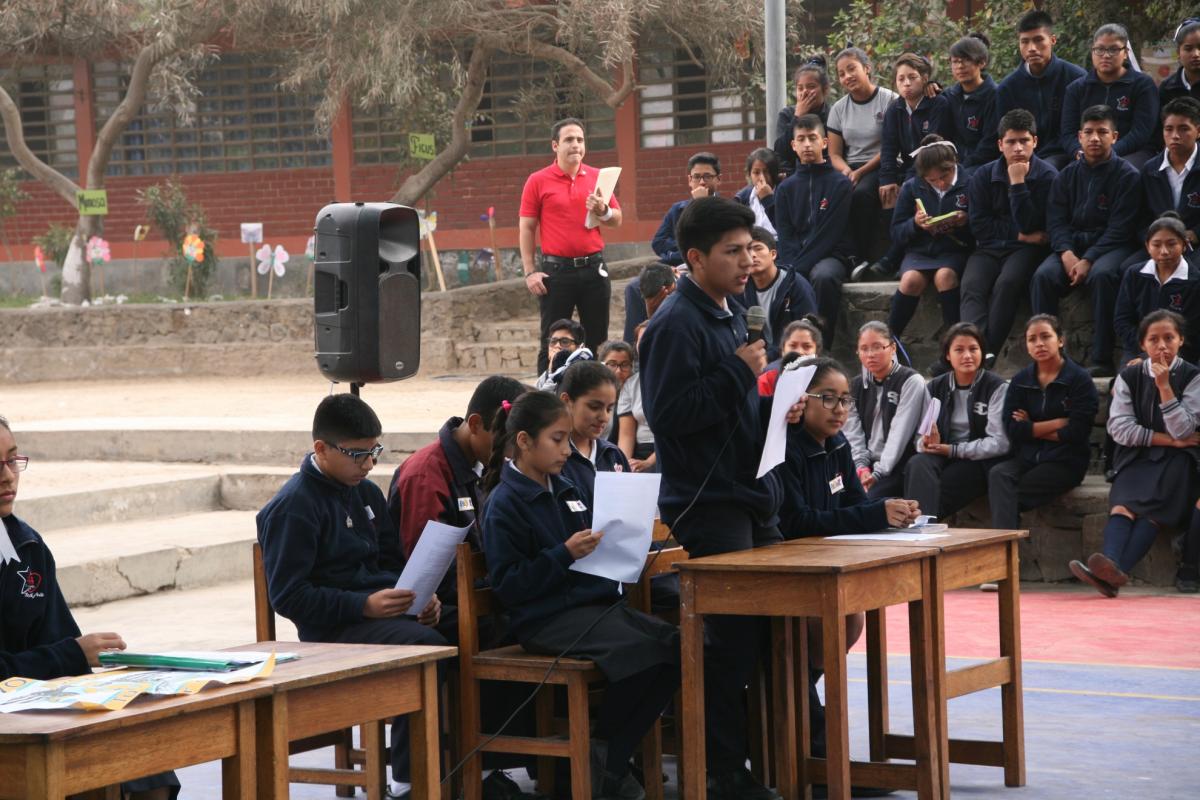 On the day of the elections there were two national earthquake drills.

On the 10th the former pupils celebrated the finals of the football and volleyball championships.  It had been a pleasant tournament, with lots of friendships renewed but that didn’t prevent a couple of robust football semi-finals.   The volleyball champions were the promoción 2014 and football 2010.  (Pleasant for me because I’m their padrino ).

The next day saw the start of a series of general assemblies for the parents dealing with the elections for the committee of the Parents’ Association (APAFA).  This again is a legal requirement, with plenty of regulations.  I think only two groups put their names forward.  In our school APAFA is always very helpful and understanding but I gather in some schools they are more aggressive and demanding.

On 15th we had our second Day of Achievement, again obligatory to allow the parents to see not only what affects their children but also the general working of the school. 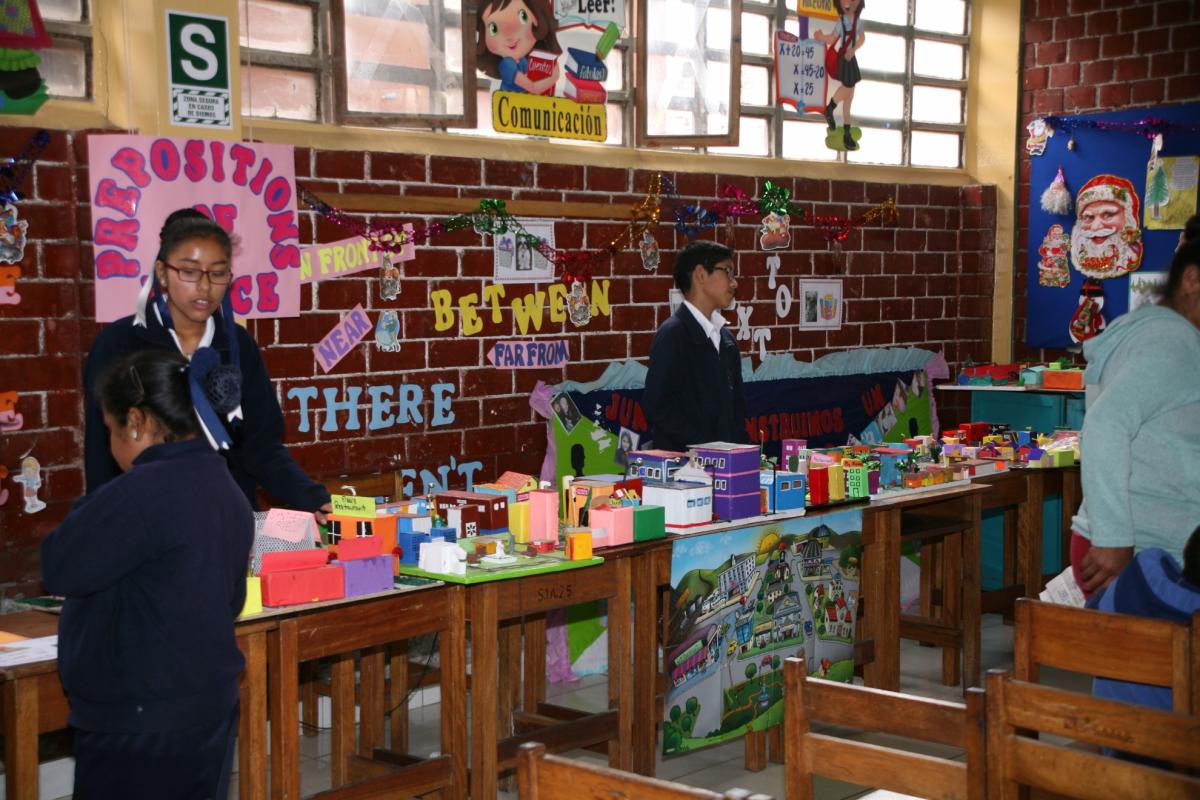 In reality most parents were connected with primary pupils and so on one hand you had crowded classrooms while important secondary subjects received few customers.  Certainly a lot of work goes in to putting on the day.  Each time there are fewer parents.  I must say it was a bit uninteresting until the 5th year girls put on a fashion show, modelling their own creations – formal and leisure. 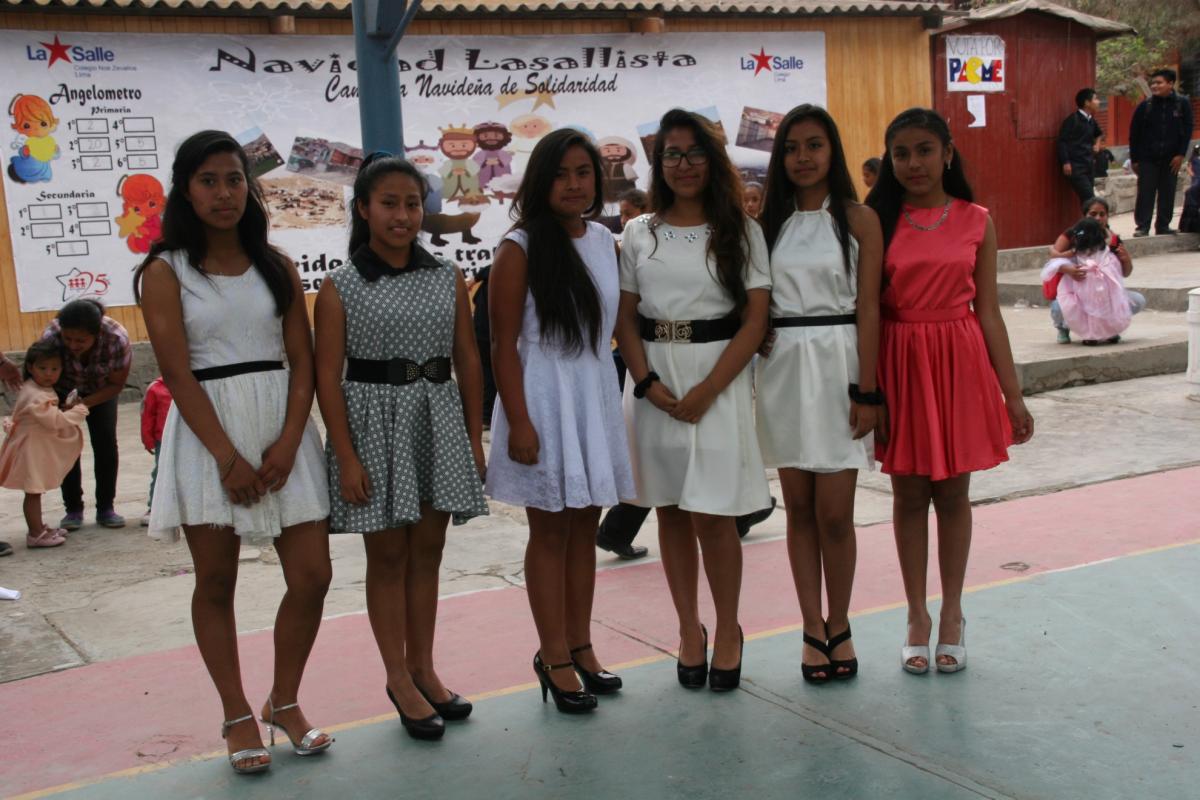 16th was a normal school day, though exams had long been finished.  However the 5th year had a jornada – a series of games connected with sport.  All seemed to enjoy it, though it was a very hot morning.  In the evening, groups from our other three schools in Lima gathered with a group of our pupils, in preparation for NANIPO –Christmas for the poor child.

This involved gathering presents, food and clothing for five communities – four outside the school and one inside.  The young people showed lots of energy and affection, playing games before giving hot chocolate and panetón – the equivalent of Christmas cake here – and then the presents.  A school in one of the wealthier areas of Lima very generously supplied loads of presents. 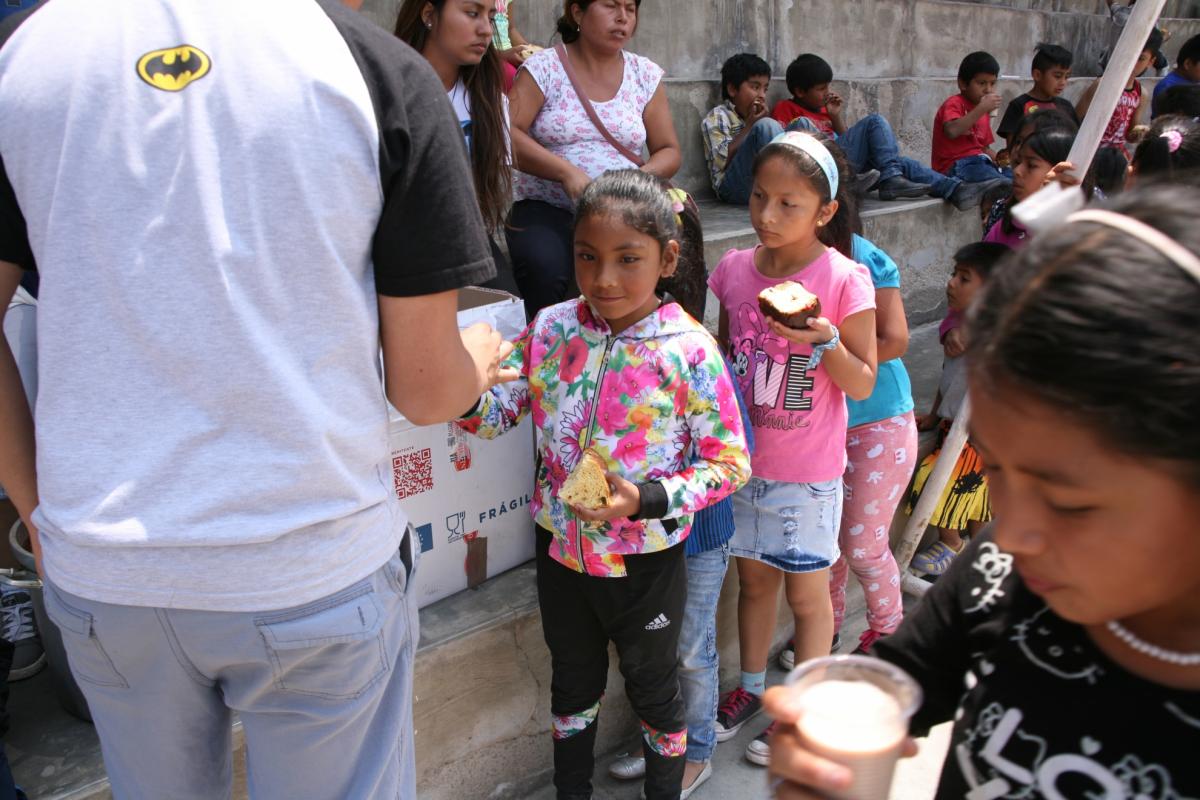 On 19th before the mass for the secondary pupils, each year group had to sing a carol.  There was lots of enthusiasm but not too much talent and this was not helped by a faulty sound system.  After the mass, each form went to their classroom for food and drink and a last get-together.  In the afternoon, the primary pupils had their carol service and it certainly had the edge on the older pupils.  They also had their get-togethers, with parents being much more involved.

The pupils were not in school again until 23rd.  Staff were completing all their paperwork and evaluating the school year.  On 22nd there was a gathering of all the branches of the staff for the closing of the 25th Anniversary Year.  There was a video recap of the various activities of the year and a report on the work of the various sub-committees.  Then there was the chocolatada – hot chocolate and panetón, the exchange of messages and the presentation of hampers – provided again by the school from Lima.

On 23rd there was the official closure of the school year.  Primary pupils were first when the head gave a summary of the year and the percentage of pupils in each year in categories (A, B, C etc.) for maths and language.  The highlight for me was the 6th year girl who spoke for the pupils.  Her confidence and fluency were remarkable.

The secondary closure followed, longer and more serious.  The head again gave a summary of the year and then a break-down of passes and fails for each year, for each subject.  It was a bit long but there was certainly tension, especially with the 5th year because a failed course would mean a re-sit before they could claim their certificate – necessary for many things here.  There was a huge sigh of relief when the head said there were no repeats in the 5th year.  Three failed courses and you have to repeat the year.  Another important part was the naming of the top ten places in the 5th year.  This is based on the accumulated marks of the five years of secondary education as given on their certificate.  To be in these top ten may also lead to opportunities for scholarships at universities.  In the photo number 4, a girl, is absent.  You’ll notice the scarcity of boys in the line-up. 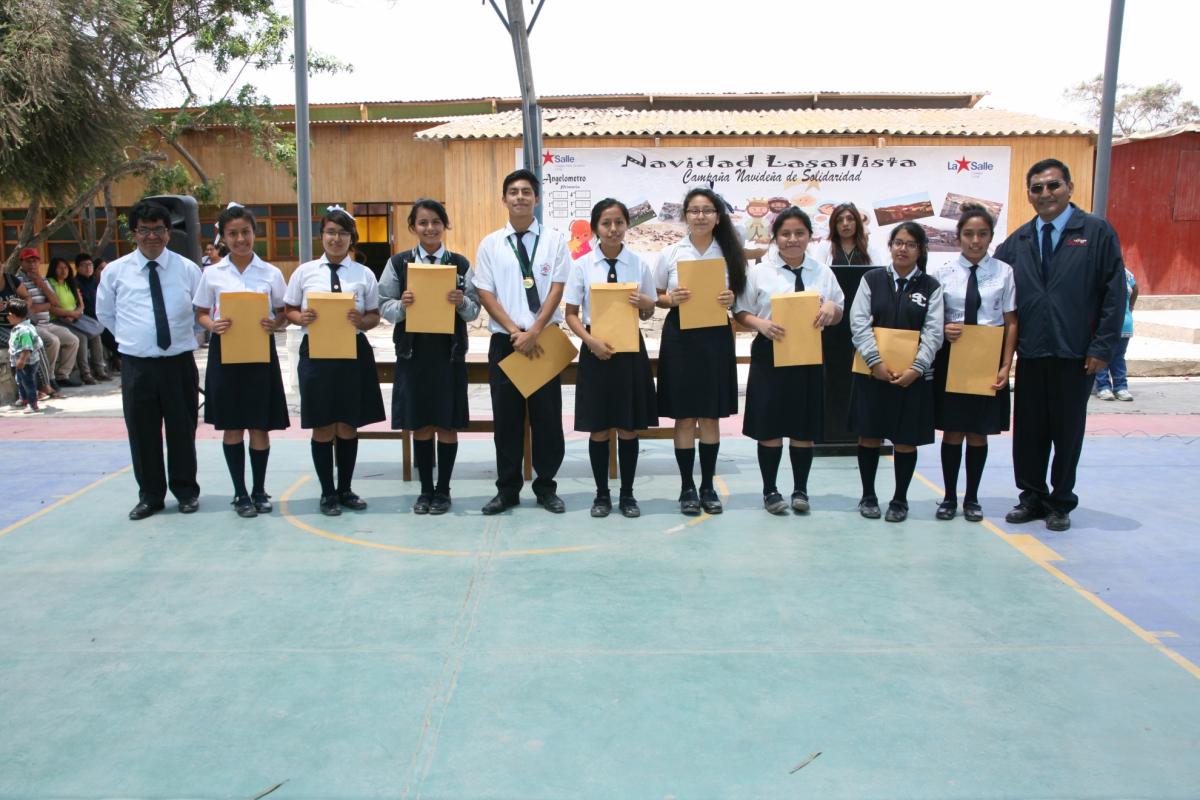 There was a much lighter atmosphere later on when they gathered at a rather nice venue for the leavers’ fiesta.  All  were very elegant (clothes can be hired quite cheaply here).  A group of them put on a formal dance based on the waltz which went very well much to their relief.  There were various speeches, then food, then the dancing began and went on to 5.00 am.  I must say I found the 5th years a very nice group of young people and can only pray that all goes well for them in their futures.  Many told me what they hoped to do but always buzzing in my mind were the financial situations that could prevent many a gifted youngster from following his or her ambition. 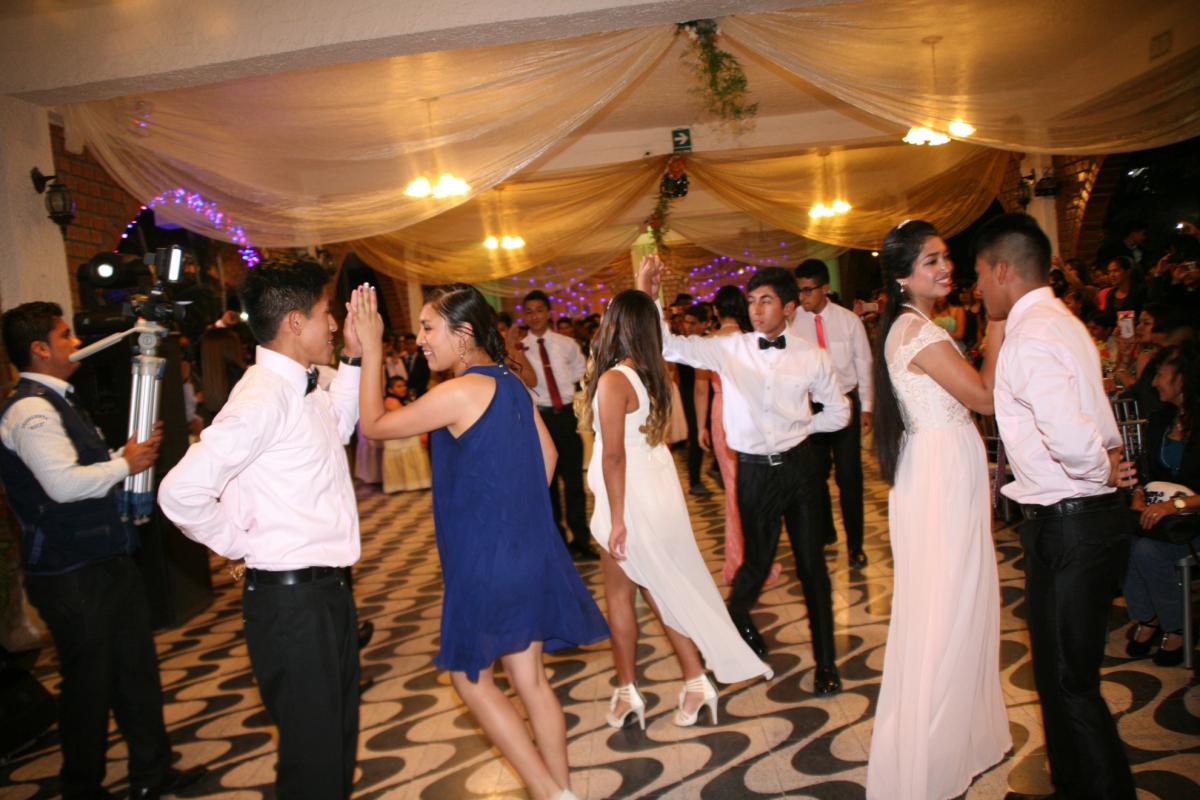 Thank you to all of you who have supported us over the years.  You have helped to change lives.  May 2017 be a year of happiness for you and yours.  God bless.