Letter from Zapallal: May 2016

I am writing this on a lovely sunny Saturday morning with the only sound being the bouncing of basketballs as some of our younger pupils hone their skills. I’m writing a bit later than usual but I thought I would wait until we had the celebrations for Mother’s Day.

The big event of the month, outside of the school, was the elections, which always take place on a Sunday. This year there seemed to be fewer people about, no long queues outside the polling stations and no evidence of military security. We did get a shorter sermon at the early mass so people could get to vote. Voting is obligatory and you must vote in the area stated on your identity document. Many people move and do not get their ID address changed so they must return to wherever the place is. One of the penalties for not voting is a fine. Many people calculate the cost of fares – bumped up by the coach companies – against the fine and often opt for the latter. After a long spell of bright sunny mornings election day was chilly and damp. No candidate got an overall majority so there will be a second election in June. Keiko, the daughter of the imprisoned ex-President Fujimori, came out with the most votes and she will now contest the second ballot with the runner-up when a simple majority will suffice.

The main part of the hidroponía has been completed but there is still quite a bit of work to do to get it ready for planting.

The floor and roof of the intended chapel have been completed and there only remain the windows. The ONG (quango) providing some of the funds has asked that the area previously designated for the clinic be turned over for a games/play space for stimulation of the youngest pupils. There is already an outside play area.

Our floodlights for our basketball/assembly area are being either renewed or repaired. The posts are well over 30 feet in height. The scaffolding used for the first set of lights must have broken every Health and Safety rule. It was most unsafe. We now have a much more professional system. 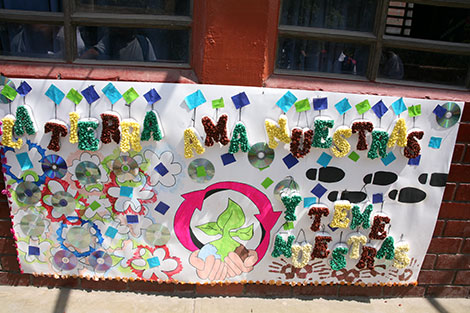 All the infrastructure for the roofing of the balconies is finished and painted. All that remains now is the actual roof. I asked the man in charge when that would be done and he said when he received the advance to buy the materials! It will be interesting to see what happens with the run-off water.

The lines indicating the routes for evacuation during earthquakes or tremors have been freshly painted. There was a national earthquake drill on 22nd. The day before we had a practice which went well. The official drill was excellent and all the buildings were evacuated and the pupils assembled in under a minute. Of course immense damage can be done within a minute. Fresh in people’s minds was the fatal earthquake in neighbouring Ecuador.

22nd was also the Day of the Earth. This year it was more low-key than usual with only a competition of panels (6’ x 4’) with an environmental theme. There were some good ideas and lovely art work.

May is the month of Our Lady and also of our Founder, St. John Baptist De La Salle (Patron of all educators) so we had a short procession with statues during the secondary assembly. The pupils of Inicial – kindergarten – had their own little ceremony with most of them, girls included, wearing Brothers’ ‘habits’ made from black plastic rubbish bags.

On 4th the municipality took over our sports arena to hold their regional celebrations for Mother’s Day. Before this they had sent a lot of people to prune our trees and bushes and to cut all our grass areas. They flooded the area with personnel, had loads of equipment, possibly 2000 chairs and an equivalent number of presents. By the next morning the place was spotlessly clean and everything removed except the staging which they left so we could use it for our celebrations. These took place on the Friday 6th. The actual day is the second Sunday of May. 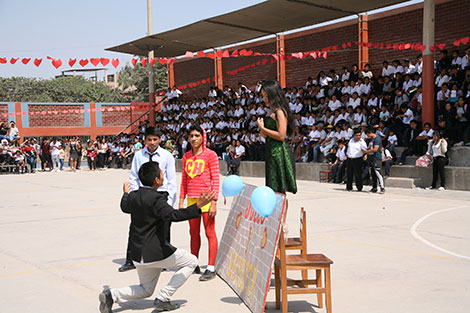 Plenty of preparation went in to the day with music being heard well after school hours as pupils practised dances. The day was sunny and warm, perhaps too much so for the pupils who were seated looking in to the sun. 5th year boys escorted the mothers as they arrived, first to a group of 5th year girls who pinned a sort of commemorative badge on their clothes and then to their place in the arena. Two 5th year girls were the MCs. There was a hamper for every form for which a draw took place during the celebrations. A group of 5th year boys stood by to carry the impressive hampers.

There were songs, poems, sketches and dances with every year taking part.

I particularly liked when the four classes of the 3rd year primary sang a lively song. A girl of 6th primary was brilliant not only in her acting but in the amount she had learned by heart as she imagined what would make the perfect mother. Other girls acted the various imagined mums, none of whom, except the last, was interested that she was hungry.

In the secondary section I liked when the 3rd year did a very nice dance from the jungle. Possibly my favourite was the 5th year (the only year I teach). They did a very funny sketch based on Romeo and Juliet with a friend giving feedlines to Romeo who misunderstood him so what he said to Juliet was amusing and not romantic. Another group did one of their own dances which was beautifully done. The third group performed part of ‘Greased lightning’ from ‘Grease’ but they made the mistake during it of bringing in some mums from the audience to take part – John Travoltas they weren’t. 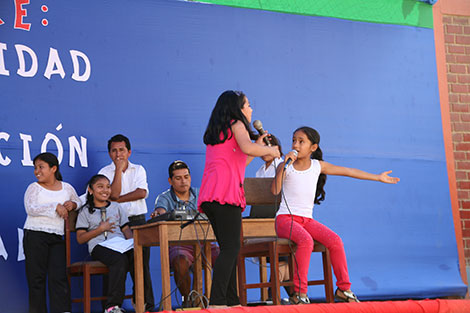 Everyone seemed pleased with al l the performances and the whole of the school staff finished off with a very fine lunch and presents for the mums.

We now have the activities of the Lasallian Week to look forward to but more of that next time.

Soon it will be Pentecost. Are there still Whit bank holidays?

May the Holy Spirit bring love, peace and strength in to all your homes. 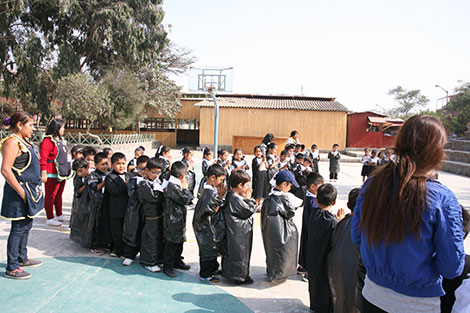