Happy Easter! May your lives during this lovely season be filled with all Easter blessings, especially love and peace. Plenty of sunshine here but I do miss the daffodils.

The new school year started on 9th March and, as always, the 5th year escorted our youngest pupils (Inicial) for the opening assembly. They have classes in the morning as do the secondary pupils. Primary pupils are in the afternoon. 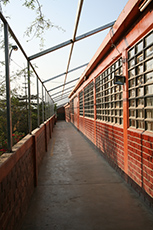 Quite a bit of work was done during the holidays. Improvements have been made to the two entrances to the school. A new floor has been laid in what was a general purpose area and will be turned in to a chapel when the new roof is finished. The newly-sited plant nursery is nearing completion. A great boon, when finished, will be roofing over the first floor balconies. At the moment there is no protection from the sun and the classrooms become very hot. In winter there will be protection from the dampness caused by the wet mists, making life underfoot much more pleasant. The infrastructure is quite an impressive piece of work but, as yet, I don’t know what material will be used for the actual roofing.

Before school started, there was an assembly of parents followed by a general faena – communal work. All areas of the school were given a good cleaning, inside and out. It’s quite a sight to see hundreds of parents working together. There was also another faena, when parents moved a vast amount of soil and sand in to the new nursery area. 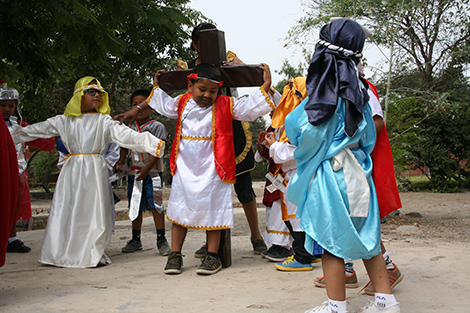 During Holy Week we had a school mass for the secondary pupils. Inicial produced four scenes from Holy Week and they did it very seriously. In the afternoon the primary pupils enacted the Way of the Cross. We then had our Easter holidays – Maundy Thursday and Good Friday. Groups of pupils from two of our schools in Lima joined some of our pupils for a time of prayer, recollection and friendship. All the schools get on very well together and all know the words of the various hymns and songs so there can be some very rousing sessions.

We were welcomed back to school on Easter Monday by a strong but short earth tremor. The 5th year have presented their projects on aspects of Great Britain as part of their English course. One group presented typical English food – bangers and mash, full English breakfast, Cornish pasties, fish and chips etc. – and it was done very professionally. London, York, Stonehenge, famous persons, music from the 60s onwards are always popular. Every year one group, at least, presents Scotland. They love the kilts, especially the boys. They did typical food and drink – haggis and whisky - and the story of the Loch Ness monster. This was a good presentation except for the kilt. The lad forgot to finish it so he had a long piece of tough paper, painted red wrapped round him. He could hardly move but it didn’t phase him. Apart from the kilt, their ability to produce clothes out of all kinds of materials is really very impressive.

Sunday 10th will see the elections for the President, Congress and the Andes parliament. No public assemblies are allowed to get in the way of the elections so the various churches have to re-arrange their services so they don’t coincide with the hours of the elections. Also no alcohol can be sold during the whole weekend. I think the original 20+ parties have been reduced to about ten but the voting paper will still be a daunting prospect for many people. Let’s hope a good government will be produced.

We are still having trouble with our post, so apologies for lack of communication. Thank you for your loyal support and interest. 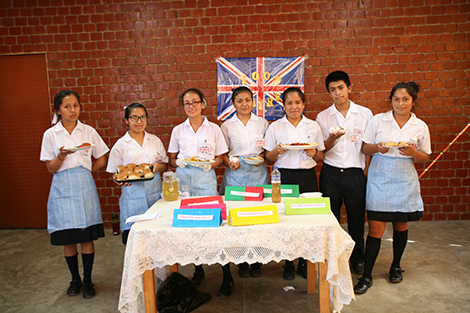