I write this from Oxford where it is slightly colder than Zapallal which I left a few days ago.  I haven’t got my files with me so if I repeat from last time please forgive me.

We were pleased with several achievements: 55 successful applicants for SENATI, a leading technical institute, one scholarship for the university Católica, one of the prestigious universities, two scholarships (out of three) for Tecsup, another prestigious institute and, to show our diversity,  two girls to represent Peru in the futsal competition in Paraguay .

As required by law we had the debate and elections for the municipio (school council) with two ‘parties’ contesting the elections.  I personally thought the weaker group won and when they were sworn in at the school closure, the performance of the ‘mayor’ did not make me change my opinion.  We’ll see if I was wrong.

On 11th the 4th year entertained the 5th year in what is a traditional farewell ceremony.  I’ve always found it a strange event as there normally is very little love lost between the two year groups.  The 4th year can’t wait to see the back of the 5th!  A very crowded venue did not help the situation.

On 12th we had the Day of Achievement, again required by law, to allow parents to visit the school and see it in action. In the morning the secondary pupils were on show and as usual, not a lot of parents turned up to see the work of the various departments and hear the pupils explaining the ins and outs of the courses.  More parents turned up for the primary pupils in the afternoon and I’m always impressed by the confidence and ability of the young speakers.  It was a very hot day.

On 21st all the forms had their sort of class party, their ‘sharing’.  At lunch time the staff had a prayer service in our chapel and then a chocolatada, hot chocolate and paneton in the library. Pleasant but not the liveliness of some years. The 22nd saw the leavers at their fiesta looking elegant and self-conscious.  Judging by comments afterwards all seemed to have enjoyed it.

There were no classes or meetings on 24th or 25th but the staff were back in for 26th and 27th.  They agreed to do a double shift on 27th, otherwise they would have been back on 31st.  On 28th we had the official closure of the school year. Various diplomas and certificates were awarded and the first ten places in the 5th year named. These are based on the marks for the five years of secondary schooling reduced to an average over twenty, often going in to three decimal places.  They obtain a certificate from the Ministry of Education which can be useful when going for higher studies.  It was a very sunny hot day with no shade during the ceremony.  Several asked me if they could have my hat! After the ceremony the pupils departed and the parents went to the various classrooms to receive the end of year reports. 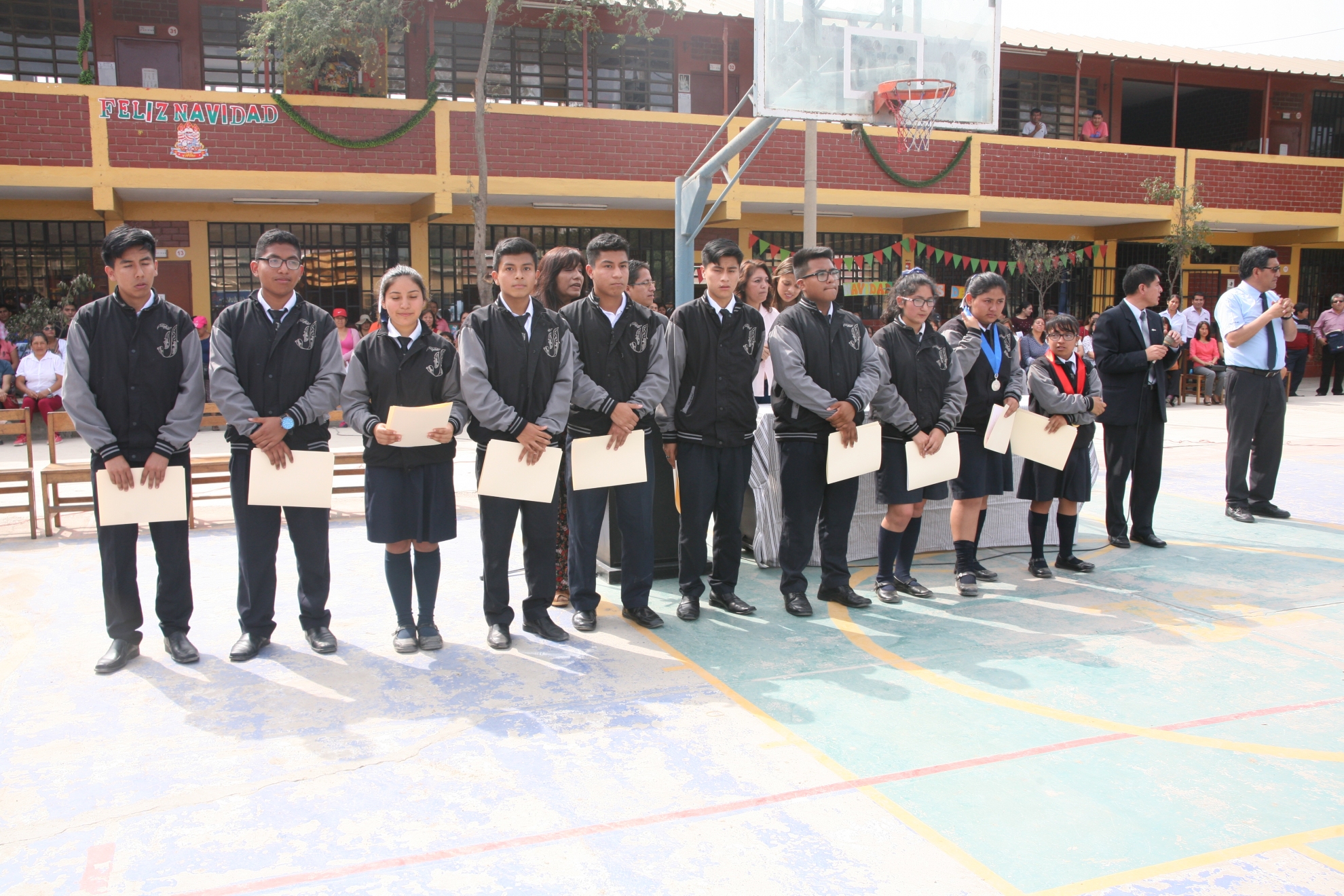 While this was going on I invited the 5th year to the library for a farewell get-together.  It was a very pleasant occasion, tinged for some with a bit of sadness but plenty of photos.  A lot of time was spent writing messages on shirts and blouses. After some of the lengthy outpourings they were a bit disappointed with my contribution:  ”God bless.  BMark”

Time was taken up with going to the local town to develop the photos I had taken of the closure and the farewell and then it was the turn of the primary pupils to have their closure ceremony.  A much shorter and simpler affair with a Christmas theme and loads of parents.  I did not have time to develop those photos as I had to re-organise the library, remove the crib and Christmas tree and then think of packing.

I left the school on 29th at 6.00 am to go to the airport, with a short stop while the taxi driver changed a flat tyre. The school year seems to have passed very quickly and now the 5th year are former pupils facing a new phase in their lives. Prayers for their intentions would help.

I wish you and yours every blessing for 2019 and thank you for your continued interest.

PS  Apologies for shortage of photos.  I thought I had brought a file with me.