Early in the month there were two national earthquake drills.  Timely, insofar as we have had several earth tremors (temblores).  There was a particularly strong one at 10.50 in the night of 27th.  At times heavy vehicles can produce some of the ‘symptoms’ of a tremor but you know it’s the real thing by the dogs.  They all start barking at the same time.  Don’t know if their paws are especially sensitive.

On 8th the former pupils inaugurated their football and volleyball championships.  There was a short ceremony recalling their dead companions and then a march-past before the games began.  The competition was as fierce as usual.  It’s always good to see so many former pupils returning – not just the players but plenty of supporters, all with their own commemorative shirts.

The dominant feature of the month was the celebrations for the 25th anniversary of the school.  Classes ended early on the Friday so the pupils could help with the general tidying up of the school and putting up bunting etc.  Several came back on the Saturday to finish off their work.  Our assembly/basketball floor was painted and looks quite smart.  Parents continued to plant flowers and bushes. 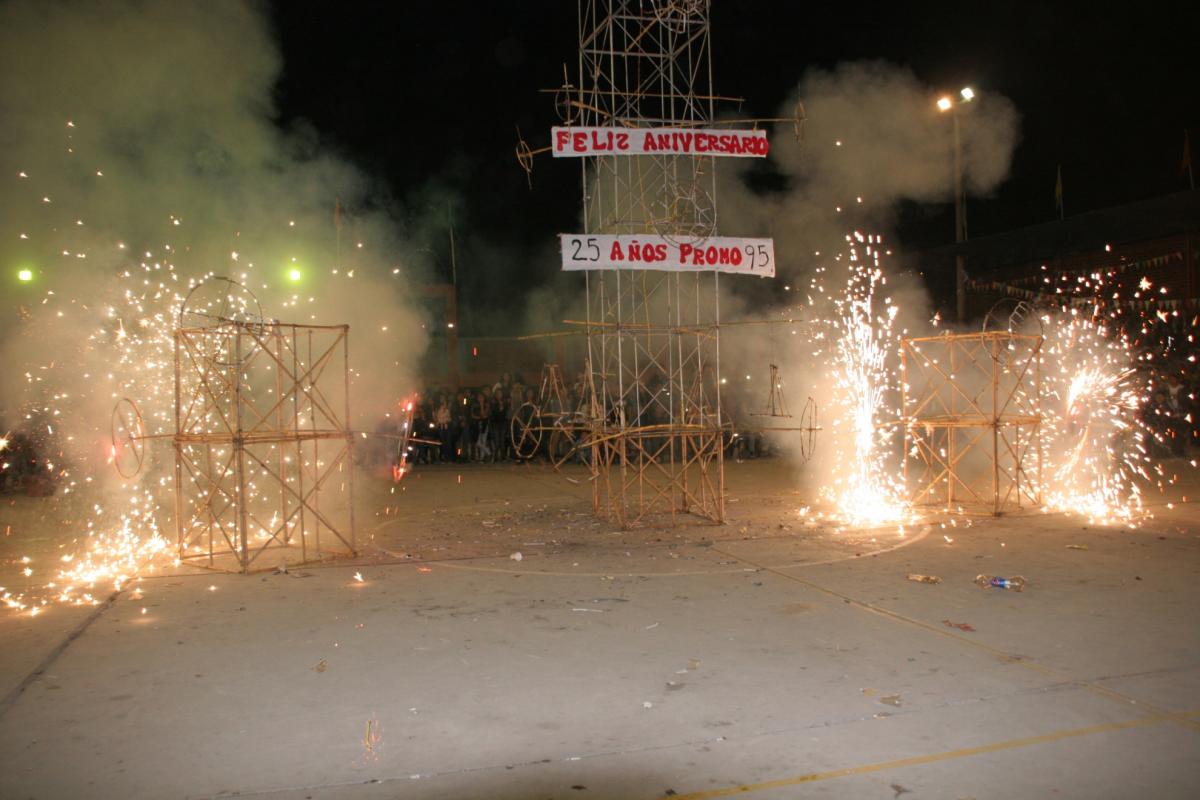 On 16th in the morning there was a gathering of former pupils in the local square to start off the formal celebrations.  There was a short ceremony, then memories of some of the first teachers and pupils.  Then they all retired to the school where there more reminiscences, a toast and a separate getting-together of the various year groups.

In the late afternoon there was a cavalcade of decorated vehicles – one for each form – going round the local streets to announce the anniversary.  Some of the floats were quite imaginative. 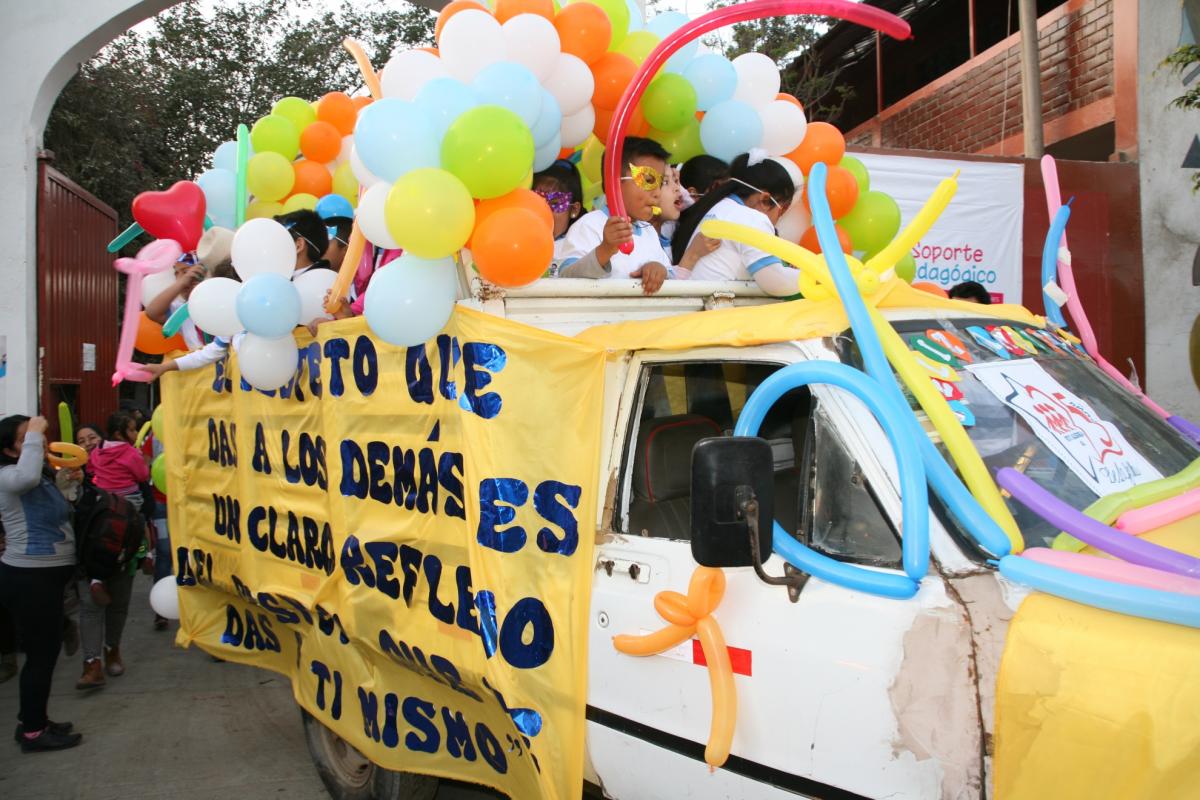 When all the vehicles were back and people settled down, they began the verbena – literally an all-night street party, but ours took place in the school and went on only to 3.00am.  After opening speeches three of the winning years from the dance competition performed their dances again.  Then spread across the evening there were different music groups which allowed everyone to dance and dance and dance……  At midnight there was the ‘castle’ provided by the first set of leavers.  These ‘castles’ are very popular – often appear in westerns where there is a Mexican input.  They are bamboo constructions with an intricate set of fireworks.  This one was very impressive, not only by its size but also by the variation of the fireworks.  There were two other smaller ‘castles’.

17th was a free day and on 18th we had the Día Central.  After a rather chilly start it turned out to be a hot, sunny day.  We started off with a mass celebrated by the local parish priest, assisted by two Jesuit priests from Fe y Alegría.  Fifty five children made their First Communion.

After mass we had the Act of Protocol – the raising of the national flag conducted by the district education officer and the singing of the national anthem. There then were dances by primary pupils, a marinera by a 6th year girl and partner and finally 5th year secondary, winners of the previous dance competition. After a break all the personnel of the school and invited guests met for the presentation of mementoes with nibbles and a toast.  It was a very pleasant occasion, with lots of photos.

On 21st again all the personnel gathered at a venue outside the school for the official lunch during which there were more presentations and then, inevitably, dancing.

28th is the great feast in Peru but especially Lima, of Señor de los Milagros – Our Lord of Miracles.  Huge processions in Lima.

On 29th there was a display of the products of our various workshops.  I often go round the classes but even so I was impressed by the standard, diversity and creativity of the pupils.  Also good to see was their confidence in explaining the various processes etc.  While this was going on the parents of the 5th year secondary were providing a pollada – a sort of barbecue with chicken – to raise funds for the 5th year end of year activities.  Not to be outdone, 2nd year primary also offered a variety of snacks.  Meanwhile outside the school, primary parents were doing a big planting job of flowers and shrubs in the area bordering the footpath.  If everything takes – and people respect the area – it will add a welcome touch of colour to the main street.  I think the next anniversary activities will be nearer to Christmas which is not all that far away – Advent soon. 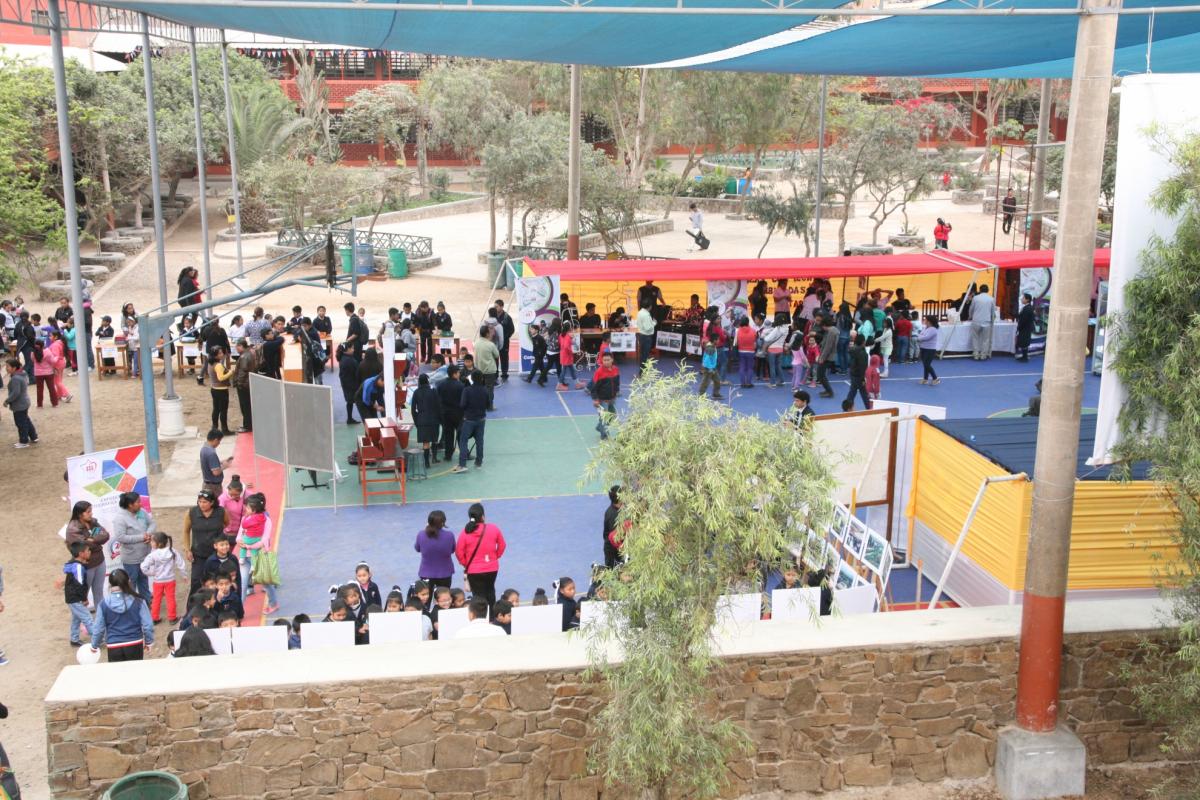 All blessings at this special time.  May there be many miracles in our lives.