It’s hard to believe that August has just begun.  July was a fairly damp month but that didn’t stop various activities.  The first, and it is an important event here in Peru, was Day of the Teacher.  There was plenty of enthusiasm and talent with songs, poems and dances interspersed with quotations about the importance of teachers and the regard felt for them.  The 5th year were the brains behind the celebration. Afterwards all the personnel of the school went to a local restaurant for a celebratory lunch which, as is normal here, ended up with dancing.  All this was on 5th.  The actual Day is 6th and that was a free day for the school.

The next day there were two national simulacros – earthquake drills.  They went off very slickly.  Ten days later there was quite a ‘quake – 5.3 degrees – but it was deep, 55 kms, so apart from the shaking there was no damage or injury.  Two days later there was a longish temblor but it was quite weak.  Nine years ago in August we had a very bad earthquake, with nearly six hundred deaths, so people take drills and precautions seriously.

On 8th we welcomed 27 French volunteers, teachers and pupils from one of our schools in Rheims.  They used what will be the chapel as a dormitory.  Fortunately all the glazing was finished in time – multi-coloured  glass.  It looks very nice.  The Brothers’ schools in France have a national campaign and project to help in other countries and we were the recipients this year, so not only did we get a group of very good workers but they covered all costs of materials and lodgings.  They formed two groups.  One was involved in building a new area for rabbits and guinea pigs and the other in clearing and replacing roofing on the very large area behind one of the school blocks.  They quickly got in to their stride and the work really went on apace.  With help and guidance from a professional builder they were soon mixing cement, laying bricks and a new floor. 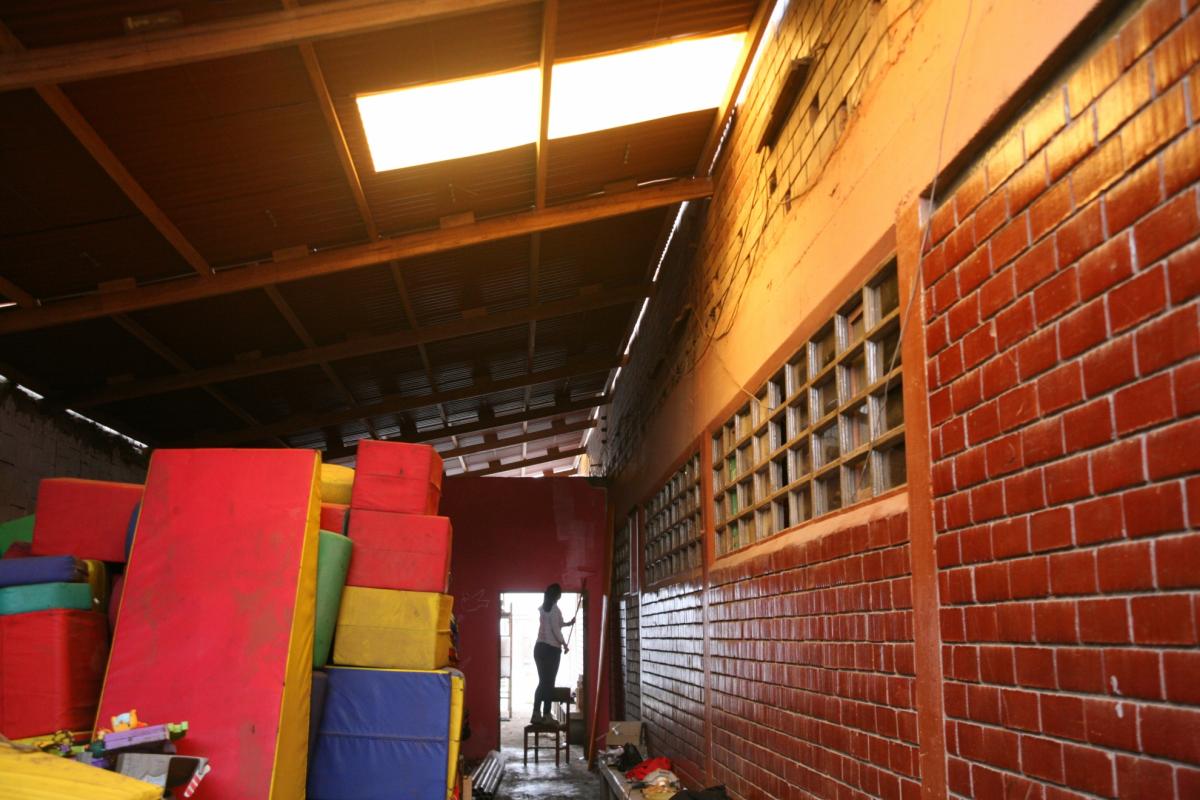 The roofing people had a trickier job as it was not easy to put in the new beams.  However with the help of Jacinto, one of our very talented workmen, obstacles were overcome.  Their only regret was that they didn’t have time to complete the whole roof – a few yards remained to be finished.  They also had the tiresome task of clearing away lots of stuff that had just been dumped in the area as ‘convenient’.

The French girls were also involved in the Day of Achievement, when departments put on show the work of the pupils who explain the various courses.  The beauty (cosmetología or estética) department combined make-up and hairdressing with a fashion parade of regional costumes made from re-cycled materials.  The French girls were very willing to be models but re-cycled dresses from the jungle were little protection from a cold wind and they were visibly shivering with cold.  However two of them were prize winners so they thought their sufferings worth it.  Part of the competition was the treatment of nails.  Forget your normal manicure procedures , the only way to give you an idea is by means of a photo. 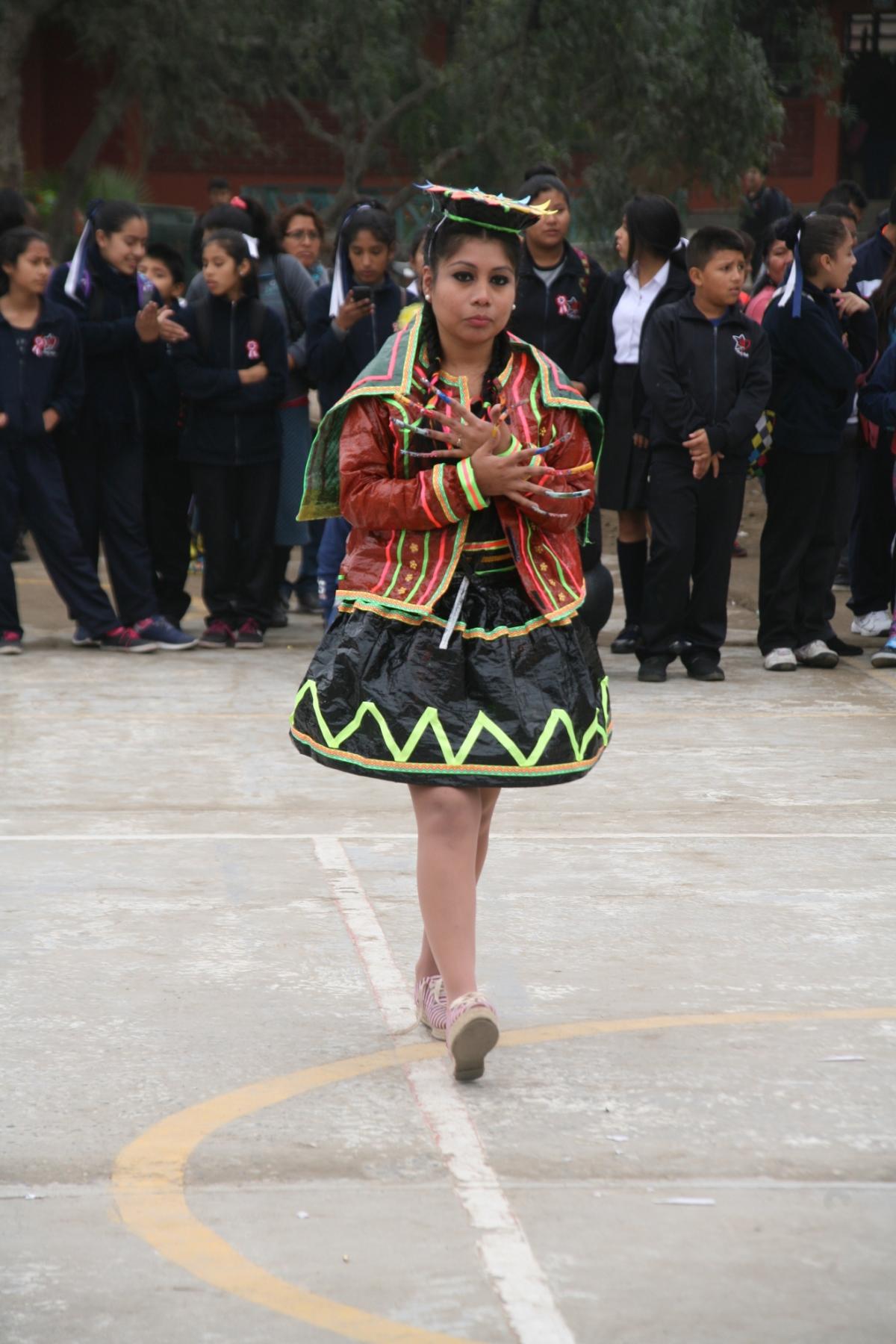 During the Day our group of 12 pupils and two Brothers set off to take part in the misión to poor villages in the Andes in the Cusco region.  They will spend their two week holiday in manual work, teaching and sharing with the people.  They are always immensely proud of having been part of the group but they are also shaken by the poverty and want they witness.

On 24th we had a Grand Bingo, spread over several hours.  Besides the various games of bingo there were performances by some young dancers and two music groups of our former pupils.  There were also types of fairground games.  The inner man was not forgotten as the parents of every form provided various dishes for sale.  The variety of food was incredible and also the fact that almost all of it was consumed.  The people were willing to wait as the two big prizes were 750 soles and 1000 soles – more than many of them would get in their monthly pay packet.  The big prize went to almost the last few numbers but then the winners were a young couple with the wife pregnant.  The funds will be used for the various expenses connected with 25th anniversary celebrations.  What was a blessing was that after several wet days we had a completely dry day. 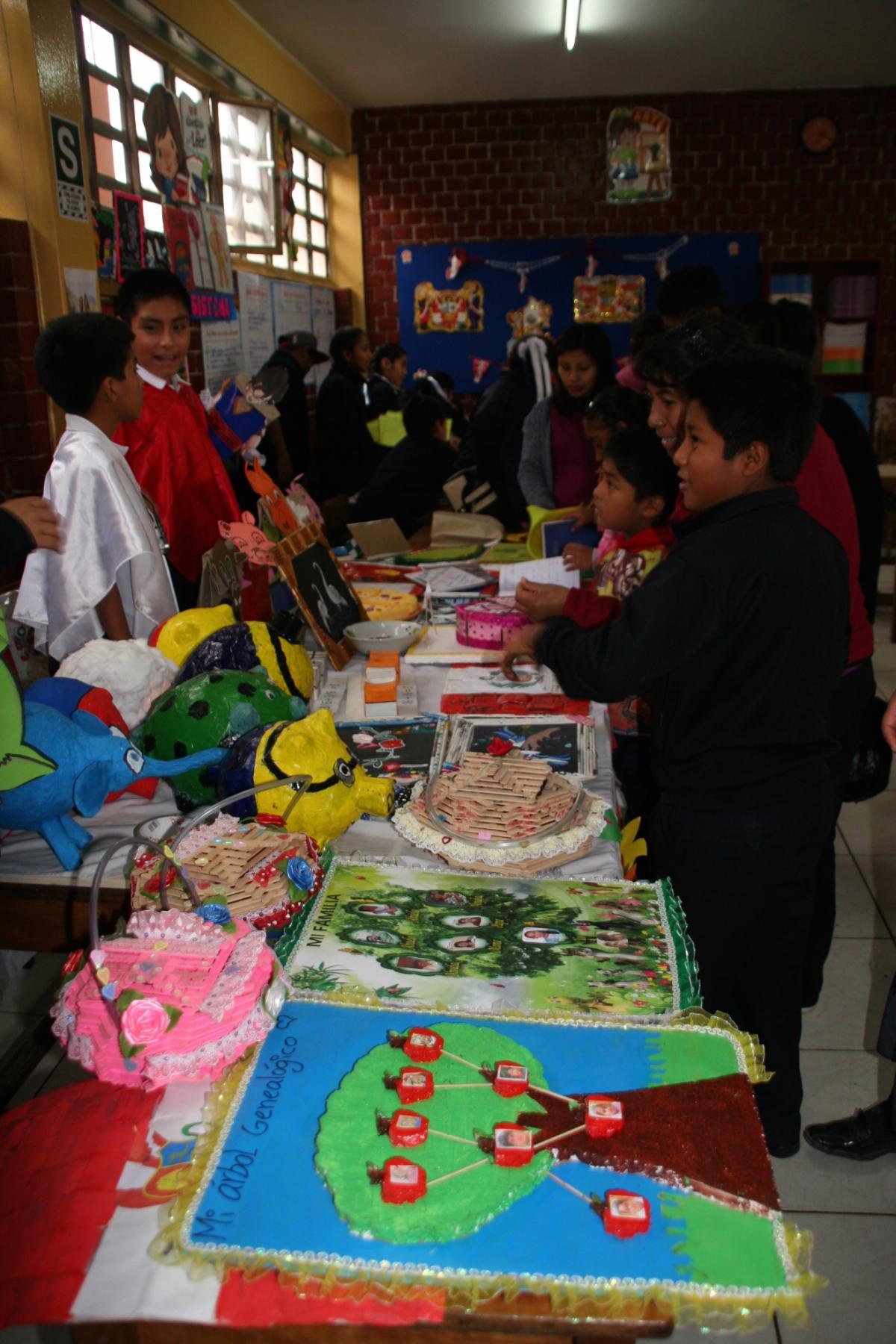 As I mentioned last time the roofing over our balconies is complete and a great blessing to us on the first floor (second here) but now the ground (first) floor suffers because the rain that drips from the roof flows back on to pavements previously always dry.  Pylons have appeared with girders that when complete will support a type of roofing for our hard play area.  This will be a great blessing as the sun can be a real problem during things like assemblies and other gatherings and at the present moment it is wet underfoot.  I’m looking forward to seeing how they will lay the roof as it is a big area.  They should finish in a few more days. 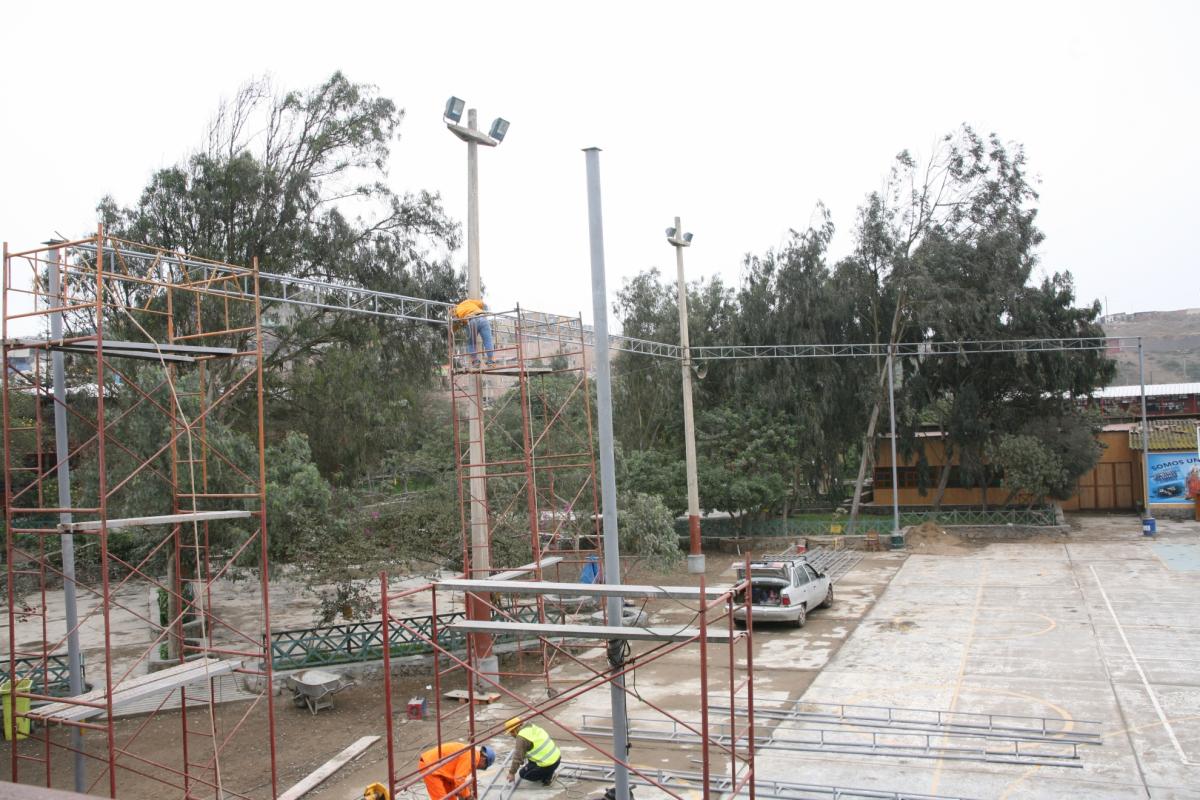 On 27th the staff came in to school to join the French volunteers in their work.  The extra muscle and enthusiasm helped as did the camaraderie.  At lunch time all gathered together to say goodbye to the volunteers.  There were speeches, songs and dances, plus of course, refreshments when some of the French for the first time tasted the national drink of pisco sour.

When the staff went off home the volunteers returned to their work.

The next day, 28th, was Fiestas Patrias, the Independence Day of Peru, a national holiday but the volunteers worked the whole morning but they had to drop tools as they were leaving for France in the evening.  They were a very pleasant group and fitted in well, especially with the younger pupils.

The new President was sworn in.  It’s a bit depressing now to see so many posters and painted walls that remain from the elections with the big smiles of the candidates most of them giving a thumbs-up.

The last day of July was a big surprise.  We had had the usual mix of dry, damp, chilly weather but the afternoon of 31st was like a summer’s day with a clear, blue sky and a hot sun.  Shorts and sleeveless tops were quickly in evidence equally quickly to be changed because as the sun went in the temperature dropped considerably and the chilly wind got up.

The second half of the school year starts on 8th.  We will be looking forward to the end of the school year as you start a new one.  For all of you who have children still at school I hope it will be a happy and satisfying time for them when they can give full rein to their talents and abilities and realise some of their dreams.