In May 1996 Delia and Michael came to our school, Fe y Alegría 43 La Salle, in a shanty town in the coastal desert north of Lima in Peru. From this visit grew the project “Sharing the Struggle”, whereby we received help from Sainsbury’s Magazine, its readers and people who sponsored children in the school. 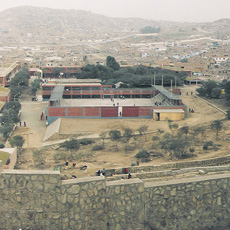 There are 1400 pupils, aged from kindergarten to 5th year secondary. The secondary pupils have classes in the morning and primary in the afternoon in the same classrooms. In addition the secondary pupils come in the afternoons for workshops – pastry, graphic design, dressmaking (the textile workshop is seen on the right), electronics, electricity, assembling of computers, carpentry and metalwork. The school has a good reputuation for the products of these workshops. We have won many prizes. Also our work for the environment has been recognised at national level. With plenty of hard work, perseverance and lots of water, we have turned the school site into an oasis with trees, bushes and flowers and the much-visited hydroponics unit. 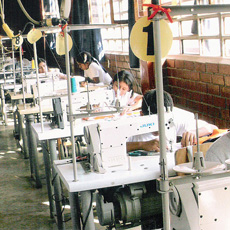 The school is also another type of oasis, offering a place of stability and calm from the daily problems facing their families – poverty, unemployment, malnutrition, poor housing, injustice and violence. Every year we have successful entrants to universities and further education but this is for the lucky few, as fees, fares and other expenses prevent many capable pupils from going on to further education. Over the years funds via “Sharing the Struggle” have helped many of our former pupils to gain qualifications.

Despite the difficulties, the pupils show plenty of enthusiasm, giving vent to incredible imagination and creativity. The Festival of Dances and the activities at various celebrations are witness to the vitality of the pupils, bolstered by help we have received since the visit of Delia and Michael.

I’ve been here since 1995. I was head for 22 years in a Brothers’ school in England. When I retired I came here as a volunteer for two years. I obviously can’t count! My main areas of work are English classes with the older pupils and looking after the library. Thanks to the money we have received from the project we have, without doubt, the best library in a very large area, proved by the number of pupils from other schools who come to avail themselves of our facilities. 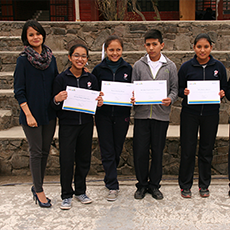 The school was founded in 1991 as part of the network of schools (Fe y Alegría) in Peru and other Latin American countries. The reason for the founding of the network in the 1950s in Venezuela was to provide schools in poor areas of the country to give a quality education to the pupils

We are very grateful for all the help we have received over the years under the inspiration of Delia and Michael. Many lives have been changed for the better. Thank you and God bless.

To make a donation - no matter how small, please send your details to feedback@deliaonline.com and we will be in touch.  Help us improve the lives of the very poor people in Zapallal.