How to make chutneys and pickles

Delia loves chutneys and pickles and, over the years, has amassed an impressive collection of recipes, allowing her to put jars of this delicious food aside to partner cold cuts and cheese. Here she explains how these foods are made – and offers a word of warning on when to eat it

I have always thought of chutneys and pickles as an essentially English thing, but of course, like so many of our seemingly traditional foods, they actually have their origins in our long history as a trading nation. The word ‘chutney’ is Hindustani, and what we are familiar with now is the result of our earlier efforts to reproduce in this country the exotic recipes brought back by our traders in India in the 18th century. They were a great hit at the time and have since become virtually an indigenous part of our cuisine – in a way that the food of no European country ever has.

I’m a total devotee. I just love the idea of putting food by for later. Actually, I love all the things we eat with pickles and chutney, too: cold cuts, pork pies, Scotch eggs, ploughman’s lunch and, of course, curries! Over the years I have been cooking, I have acquired a long list of recipes, including established favourites and latest discoveries. Here are a few notes to get you started:

What is chutney? What are pickles?

Chutney is a combination of chopped fruits or vegetables (or both) that has been simmered with vinegar, sugar and spices until reduced to a thick puree, which is then potted and sealed, and should last for ages. Pickles, on the other hand, are not minced or chopped, but fruits and vegetables preserved whole or in chunks.

How do I know when the chutney is ready?

There’s a very simple test. When the chutney appears thick enough, make a channel with a wooden spoon across its surface. If it leaves a channel imprinted for a few seconds without being filled by spare vinegar, it is ready.

The cardinal rule: Unless a recipe says otherwise, never eat chutneys or pickles until they have matured and mellowed – you need to store them for at least three months before eating. Freshly made, they taste harsh and vinegary – I’ll never forget a letter I received when I first started publishing recipes: ‘I’ve just made your chutney and it’s disgusting!’ I now know to warn you to be patient. Both pickles and chutneys need to be stored in a cool, dry, dark place – a cupboard under the stairs would be ideal, or else in a box in the garage or under a bed in the spare room. 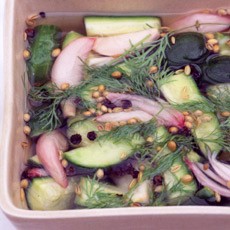 SEE ALL DELIA'S RECIPES FOR CHUTNEYS, PICKLES AND PRESERVES

How to Buy and Store Spices

Delia Online Content Promotion
Alex Mackay meets Grana Padano Ambassador Chef Danilo Cortellini for a gnocchi masterclass at Taste of London. Read how they got on