Delia visits the cream capital of France and discovers crème fraîche – the taste that is synonymous with Normandy. Photographs by Peter Knab

Have you ever stopped to wonder what life in the kitchen was like before the days of refrigeration? A nightmare, you might be thinking, and I suspect for the most part you'd be right. And yet there was one particular ingredient, important in so many areas of cooking, that owed its highly prized virtues to that very lack of refrigeration. That ingredient was matured cream: fresh cream from the dairy that was allowed to sour naturally. It made the lightest scones and fluffiest pancakes, and gave just the right balance of acidity and creaminess to countless sauces. 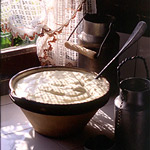 In former days cream, unless eaten straight away, was allowed to sour naturally and become thicker, richer and slightly acid. Ironically, pasteurisation – that great French invention – literally killed off matured cream; the high temperature that cream is subjected to halts any natural maturing process so that without refrigeration it simply goes off, not sour but bad! 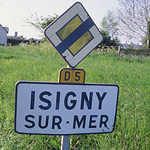 What we know today as fresh pasteurised double cream has lost something of its kick – altogether a less interesting product. We British might not be famed for making a fuss about a little gastronomic hiccup that might make our cooking a mite more bland, but a few miles across the Channel the French view things culinary in a totally different light.

Normandy is not only a region where eating, drinking and cooking are cardinal occupations, it is the cream capital of France. Here, something as precious as matured cream could not be sacrificed to mere pasteurisation. So they set about putting it right, and produced a taste-alike, look-alike ingredient and called it crème fraîche. It is ivory coloured, velvet textured and in taste captures all the glory of Normandy.

To discover its secret I went to the Cherbourg Peninsula, to a small town called Isigny-sur-Mer, built round an inlet from the sea. Here, the Normandy countryside is bordered by the sea and long stretches of sandy beaches.

It has been described as an 'ocean of green' but in May – the very best time to visit – there is another layer of what Marcel Proust called 'blushing flowers with white satin trains', the apple trees now covered with a shower of delicate pink blossoms scattered in amongst the meadows and nestling around the traditional stone farmhouses. And around the trees those Normandy cows, cream and white with brown markings and the telltale 'spectacle rings' around their eyes. The cows look friendly and sparky, but they are too shy to have their noses tickled. 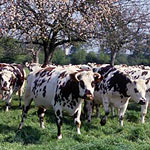 My first taste of Normandy comes with a glass of chilled pommeau, a delightful drink of pressed apple juice laced with Calvados. My host Daniel Delahaye, the largest producer of crème fraîche in the region, explains its history and what it was originally. When he was a child, it was still made traditionally in earthenware pots. After the evening milking, the milk was left in pails overnight to cool down naturally from cow temperature (37-40°C) to apple-cellar temperature (about 12°C). 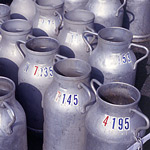 Next day, the cream was skimmed off and placed in an earthenware pot where it joined the cream of the previous morning's milk. Held like that at cellar temperature, it develops natural lactic ferment which, when topped up every morning and evening, works its way through and the cream matures and thickens.

By the end of each week, half the quantity would be made into beurre cru, and the other half used as cream (which, incidentally, still had eight days' shelf life without refrigeration). So the natural ferment not only acted as a good preservative but also gave the cream its thick texture and faintly acid flavour – and this in turn is what helped to make all those creamy Normandy dishes so highly flavoured and special.

But what happens today? How is this important ingredient made? Daniel explains that today's story is not so very different from the original. After pasteurisation the cream is stored, not in small earthenware bowls, but in huge stainless steel containers. Then a small amount of ferment is reintroduced and the cream is left for a period of time to develop its texture and flavour just as before.

We are now in a Normandy restaurant, so close to the sea that the waves dance and leap up at the windows. I am eating plump little local mussels in crème fraîche and cider sauce. Daniel explains that its secret dates back millions of years when the region around Isigny was geologically formed. Melting glaciers, eruptions and sea invasions left this area part of the Amoricaine Massif, surrounded by rocky formations, but with a central cavity like a huge basin of very deep soil. In winter, from about October, large parts of the area are flooded as the sea seeps up through the soil and brings with it a wealth of mineral deposits. This enriches the soil in such a way that when the sea recedes in spring it leaves behind the lushest grazing land imaginable.

The pastureland is profoundly influenced by the climate. Tempered by the Gulf Stream, the weather is mild but frequently alternates between bursts of sunshine and showers. This encourages the growth of the grass: locals claim you can actually see it growing or, as I heard it put – if the farmer leaves his stick in the field the next day it will be hidden from view. Add to all this the special breed of Normandy cows, not the highest yielders of milk quotas, but a breed which produces an abundant yield of something very precious: casein, or 'noble protein', plus the fatty acids that are essential ingredients for making butter, cheese and the finest cream.

As always, the prime contribution is human skill. The technique of the cream-maker in analysing the quality of the cream from every batch of milk and balancing the correct amount of protein and fat that's crucial to the final flavour, texture and creaminess. The final element that guarantees the quality of crème fraîche from Isigny is the strict law of the AOC (appellation d'origine contrôlée). The milk can only come from the determined area. The cows must be fed on not less than 80 per cent of grass from that area (including hay in the winter months). Regular controls and inspections are carried out on every level on the farms, in the factories and in the finished product. 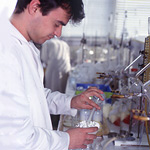 It was on holiday in France a few years ago that I became utterly addicted to crème fraîche, piling it on to cherry clafoutis and tarte Tatin from the local baker. Back home I discovered it has a much longer shelf life than double cream. It is slightly lighter too, having only 40 per cent (instead of 48 per cent) fat. You don't have to whip it either, as it is already thick and holds its shape. It is also a great cooking medium, since it doesn't separate when heated. And now the good news for waistline watchers is that there is a lighter version: low-fat crème fraîche, which has only 15 per cent fat.

My last great treat was to watch Normandy chef Jean Luc Fossé using crème fraîche in the kitchen of his restaurant, La Marée, along the coast at Grandcamp.

We tasted, too, mussels lightly stewed with leeks and crème fraîche and finished off with hollandaise and flashed under the grill. Juicy fat scallops were sautéed with sliced chicory then cream added to mingle with the juices. Sirloin steaks were seared and finished off with cognac and cream and crushed pepper. 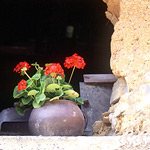 Next time you open a tub of crème fraîche, take a spoonful, pause for a moment, first to see, then to smell and finally to taste. Close your eyes and you're in Normandy.

Roast Tenderloin of Pork with Mustard and Creme Fraiche Sauce