Delia went to the Basque country in Spain to see the finest anchovies harvested from the Cantabrian Sea and devotedly prepared for the can. Photographs by Peter Knab

Throughout history the skills of cooking, dedicated to exciting the palate rather than merely satisfying hunger, have depended on the availability and quality of certain ingredients. And some ingredients have been more highly prized than others for their ability to make other, blander foods more palatable. This was never more true than with the anchovy, a tiny fish no more than 8 in (20 cm) long, which reacts to curing and preserving in a magical way that other fish do not. Once cured and preserved, it becomes a star ingredient, adding a unique zest and piquancy wherever it's used. 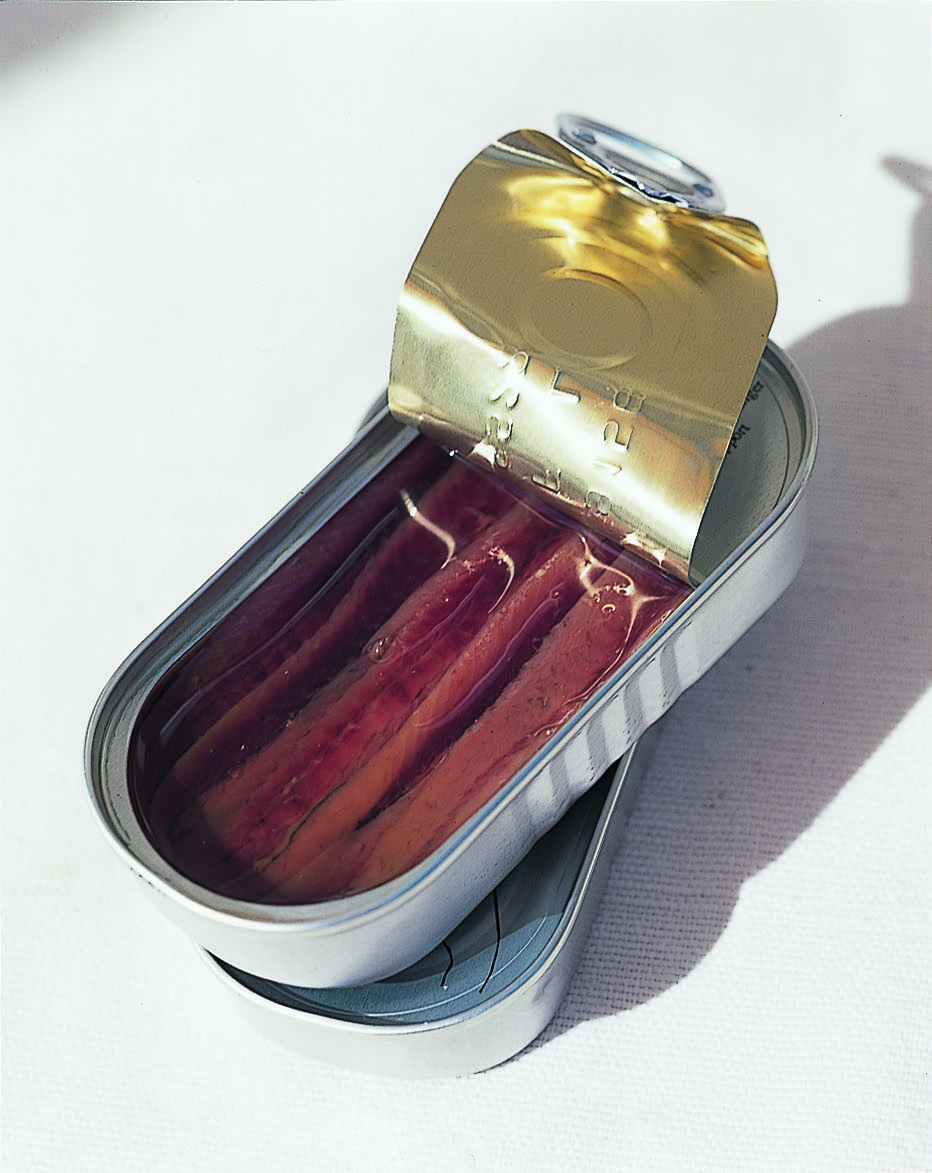 From classical times, the anchovy has been used to enhance the aspirations of cuisines all round the world. In Russia, it is eaten hot-smoked; in the Orient, dried, and in southeast Asia, it is pounded and made into a pungent fish sauce. In Britain, too, it has long been an ingredient no serious cook could be without. In Elizabethan days, anyone who boasted a fine table had a barrel of salted anchovies in the larder. And throughout the 18th and 19th centuries, it fuelled our national passion for bottled sauces with a succession of variations like Harveys (anchovies, pickled walnuts, soy, shallots and garlic), Pontac ketchup (anchovies, elderberry juice, shallots and spices), and Burgess's Anchovy Essence, which dates back to 1760. Gentleman's Relish is still being spread on toast today, and our most famous bottled sauce launched in 1838, Worcestershire Sauce, has as its main ingredient, guess what? 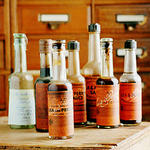 Originally anchovies were packed in salt but now, more conveniently for the cook, they come boned, cleaned and preserved in olive oil in the familiar little tins. I've always had a passion for anchovies but confess to knowing very little about them until a few months ago when my curiosity took me to northern Spain, to a group of fishing villages an hour's drive east of Bilbao, where the finest anchovies in the world are caught. 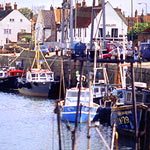 This is the Basque country – note, country, not region, for the Basques remain to this day very different from the rest of Spain. Historically, they are strong and courageous fighters, as they need to be here – this area of Spain faces that part of the Bay of Biscay known as the Cantabrian Sea, a volatile and dangerous sea, which reacts violently to climatic changes. For centuries, they have waged a constant battle against the sea to protect their livelihood. My visit coincided with the anniversary of one fateful night, 21 April 1878, when 16 villages lost 285 men and 37 vessels.

The mountain landscape, which is intensely lush and green, provides a backdrop to the rocky, rugged coastline and villages perched vertically around the natural harbours where the fishing fleets are moored. I am immediately struck by how colourful everything is – the boats painted in vibrant hues, the people dressed equally brightly; in fact the only black you'll probably see is the traditional beret worn by many of the men. I am told that, characteristically, the Basques laugh, drink and eat, strictly in that order. 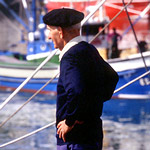 The anchovy season lasts just ten weeks, from around mid-April to the end of June, depending on the weather. This is the peak time for the best-quality anchovies. The fish is at its tenderest and plumpest in spring just before breeding, which happens as soon as the temperature of the water begins to rise. During breeding, its flesh is watery and of poor quality. However, thanks to the unpredictability of the Cantabrian Sea, no exact dates can go in the diary. When I arrive at Lekeitio, it turns out that, so far this year, nothing has happened, and there is a tense uncertainty on the faces gazing up at the grey skies. The sea does not look unduly rough but I may have to reconcile myself to not seeing even one freshly caught anchovy. The gods, however, were on our side for, while we slept, the first Lekeitio boats took to sea with sonic detectors to track down the shoals of anchovies swimming near the surface. In olden days, the fishermen would look out for the dolphins that would also be harvesting the anchovies – I always knew dolphins had good taste! 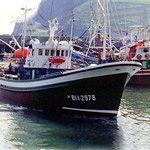 The next morning the sun even came out, and we all rushed down to the harbour to await the first arrival. Over the radio we heard that the first boat had some 10 tonnes of anchovies on board, and on the quay it was like a kind of red alert – buzzing with people of all ages. Everyone in the village is roped in during these intense two-and-a-half months. 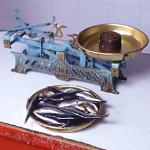 At last the first boat, bright in the sun, noses its way along the harbour wall. What follows is high drama. Alfonso Yurrita and his nephew, George (who unknowingly have been supplying me with anchovies for years), explain the procedure. The first box of fresh fish is winched up by crane on to a waiting cart. Here I get my first glimpse of their elegance and beauty, the open box glistening with silvery iridescence.

Each anchovy has a back of midnight blue graduating down to a pale blue and silver belly that is mirror-like. The cart is then rushed into the auction room, where there is one solitary table, an ancient pair of scales and a one-kilo weight. A kilo of fish is quickly weighed out and then counted, a simple but essential ritual that will determine the quality of the whole catch. Size (especially for preserving in oil) is paramount, and the price will be fixed by this; 35 to 37 anchovies per kilo is perfect and is what you and I will end up with in the tin. Other sizes are fine for sauces and purées and the larger ones will be salted whole. 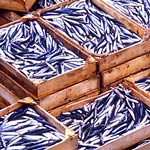 Up in the auction room, the whole catch is being sold by a form of Dutch auction, where the price starts high and is haggled down. Mr Yurrita's buyer – all the buyers seem to be women – is called Elvira and she explains she has been doing this job for 37 years, and 'has anchovies in her blood'. I imagine the auction is just as it has been for centuries, with the exception of the mobile phones which keep buyers in touch with all the other catches now coming in along the coast.

Today the Yurritas are buying four tonnes, and now another race is on: the fish fresh from the sea have to reach the brine as quickly as possible as this is critical for quality. The processing plant is just five minutes from the harbour; Alfonso explains all his plants are that near to the ports. Things are hotting up along the coast and we next visit Ondorra. By 11am, the harbour is packed with boats – a blaze of colour – and tangled rigging. Here too, the carts are whizzing back and forth and the auction room is packed, but the mood is a little sombre – the first landings are on the small side but luckily this improves as more boxes arrive. 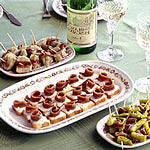 We lunch on the terrace of the Yurritas' house, in a stunningly romantic location overlooking the harbour at Mutriku and high enough for a clear view over the Atlantic where the swell of the waves is totally mesmerising. We eat anchovy tapas prepared by Amparo Yurrita: fillets curled round artichoke hearts; small crisp squares of toasted bread with chopped tomato, egg and anchovy; little boats made from crisp chicory leaves filled with a Roquefort and cream mixture and garnished with snipped anchovies; a purée of avocado combined with a thick, luscious anchovy paste. An anchovy fillet wrapped around a pickled chilli was a sensation. Next, a huge tortilla, and I write copious notes on the Basque way to prepare it.

The Yurritas are patently in love with anchovies and proud of their quality. Recalling a huge poster I'd seen on the wall of the packing house, 'Cero Defectos' (no defects), I ask Alfonso what epitomises this quality. Each anchovy, he explains, should be firm, its colour a rich pinky-brown with a visible sheen. Each fillet should be fully cleaned and trimmed with no trace of skin or bone, and whole with no breaks in it. It should be a good consistency yet tender; poor quality anchovies are either soft and soggy, or raw and tough. 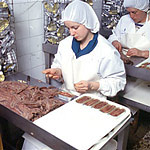 The next time I pull one of those rings and see the little fillets inside, I shall have much to think about – the silvery fish in all their glory, the colours, the people, their pride in their trade and, yes, the romance.

The anchovies fresh from the sea, and still with their natural white flesh, are taken to the processing plant 100 metres from the harbour. Those that are not beheaded and gutted go straight into preserving salt to hold their freshness for a day or so. Next, the whole anchovies are washed in a brine solution then packed into large containers, with about 5 mm of salt between each layer of fish. A final layer of salt goes on top followed by a disc, which is weighted down by a large stone. This will keep the fish well pressed and eliminate air. As it shrinks, it is topped up with more fish and salt. 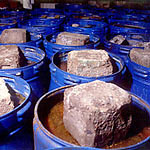 The curing takes 6-8 months at room temperature and, in the process, the salt draws out the excess oil from the fish. Storage from then on has to be in a refrigeration room to halt the maturing process – except for the smaller anchovies, which go on maturing until they eventually soften, liquify, and are shipped to Lea & Perrins. For the fillets in oil, the next stage is desalting. This involves removing the anchovies from the barrels and washing first in cold water then hot, and finally cold again. After this, the skins are rubbed off and the tail snipped with scissors. Now they go back into brine to re-absorb the salt lost in the curing, then packed into metal containers and machine dried. 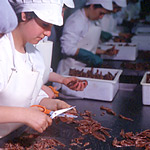 Next, each one is filleted by hand using a small knife: the anchovy is opened along the back, and one fillet is removed, trimmed and cleaned by scraping lightly with a knife. The back bone on the other fillet is removed, then both fillets are pressed between absorbent paper to pack into the cans with olive oil. After layering, the cans are topped up with oil, sealed then piled into containers for their journey to the UK. 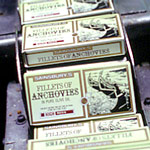